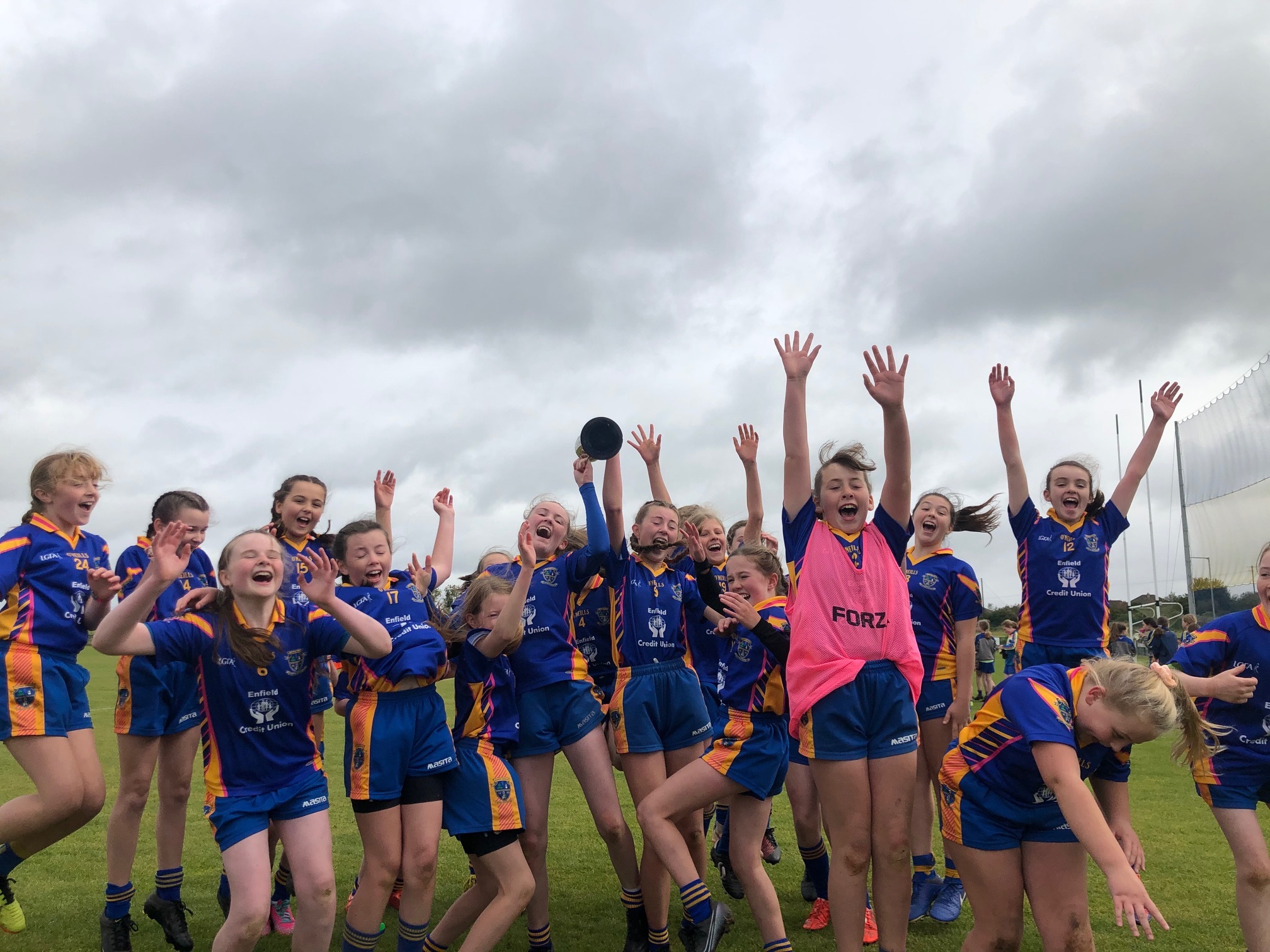 In what has been a strange and often difficult year we have gratefully been allowed some magical moments. There were times during 2020 when we thought we wouldn’t see a football kicked or hear the wonderful sounds of children shouting, laughing, playing sport, and having fun together. Well this morning proved that through the dark and quietness you can extract the light and joy, and this morning in St. Finian’s Park there were plenty of those magical moments.

Our Under 12 girls enjoyed an unbeaten league campaign and recorded a six point semi-final win over Longwood. In fact, their only really tough test had been a hard-fought round two win against Summerhill, today’s final opponents. Clonard had won the draw for home advantage in this final and consequently earned the right the wear their customary blue and amber colours, as the visitors from Summerhill donned our county colours of green and gold.

Summerhill girls drew first blood with a finely taken score as the Clonard girls seemed nervous, hitting several scorable wides in the first five minutes. But a driving run from midfield by Ava Duignan resulted in a well taken goal leaving the Summerhill netminder with no chance.

The same pattern continued as the Clonard girls played with the strong breeze but were not taking advantage of the wind on their backs. However, Siofradh Smith did increase Clonard’s advantage as she pointed two sublime efforts from distance to give her side the half time lead. Clonard 1-2 Summerhill 0-1.

Both sets of coaches rallied their troops at the half time break as this trophy was all to play for, Clonard had the lead but Summerhill now had the breeze. But no one told Siofradh Smith that the wind was an advantage as she increased her personal tally to 1-2 with a great goal just two minutes in to the second half.

Clonard were now clearly on top with Sophie Foran, Eve McCormack, and all the Clonards defenders winning prime possession around the back and midfield, quashing every Summerhill attack. But then came a hammer blow as Summerhill rocked the home side with two consecutive goals and then added another point to leave just a solitary point between the sides.

But Clonard steadied the ship with another point from the boot of Siofradh Smith, who’s accuracy from play was exceptional and was keeping her side alive. More driving runs from Katie Larissey, Eva Sheridan and Ella Monahan were causing real problems for Summerhill but just not adding to the scoreboard.

This was turning in to a truly entertaining and exciting game as points were swapped by both sides before Summerhill took the lead for the first time in the match with two consecutive points, and only five minutes left on the clock. The very lucky limited number of 100 spectators were being treated to real drama and excitement in St. Finian’s Park. The decibel level in the Park then reached it's highest of the day when the always energetic Ava Duignan pointed the equaliser for her side. What a game, no one deserved to lose this match.

The remaining couple of minutes saw more chances fall to both sides and not taken, as the referee blew the final whistle with these two brave teams deadlocked at 2-5 apiece. Meath LGFA representative, and Clonard member, Frank Hevey called both coaches to the middle of the field to explain events. There would be two halves of 5 minutes each in extra time. If that did not separate the sides there would be a free taking shootout from the 20m line. As if we hadn’t witnessed enough drama and excitement for one day.

Extra time saw Clonard play against the breeze in the first period. This time it was Summerhill who failed to take advantage of the wind as they hit multiple wides in the opening minutes. Clonard goalkeeper Karla Hannon added to Summerhill frustrations by registering two great blocks and a catch to deny their forwards. Then at other end Ava Duignan pointed brilliantly against the breeze to give her side a slender lead at half time in extra time. Clonard 2-6 Summerhill 2-5. The home side had the wind on the second half, but this game could not guarantee any outcome.

The second period of extra time saw another hallmark run from Sophie Foran which ended in a long punt kick that evaded the Summerhill backs and bounced over the crossbar with the aid of the wind. It put Clonard two points ahead with just four minutes left. Were there more twists to come? Of course there were.

Summerhill regrouped and an effort for a point got held up in the wind and floated to the top corner of the Clonard net. It was followed by another Summerhill score, this time a point, which left them two points up with just two minutes to play. Despite the limited crowd, you could cut the apprehension and tension in the atmosphere with a knife. Summerhill delight and Clonard worry, but alas, cometh the hour cometh the girl, Siofradh Smith won the ball on the forty, turned and broke past two Summerhill girls to unleash a thunderbolt to the bottom left corner of the net. Cue ecstasy among the Clonard team and support.

Summerhill were rocked but Clonard were invigorated. Eva Sheridan added more delight to her team and followers, when she was rewarded for her efforts throughout the game, with a pointed kick and the final insurance score. Summerhill did have time for one last attack but was again thwarted by the determination and commitment of the Clonard girls. The final whistle blew and the delight and joy were palpable among the home side and support, but devastation for the visitors. Unfortunately, when there’s a winner there must a loser, but what a game and what a performance from both sides. Clonard 3-8 Summerhill 3-6.

Clonard captain Sophie Foran had the honour of receiving the cup from Frank Hevey of Meath LGFA and paid tribute to her teammates, coaches, Dad, and of course to Summerhill. Well done to all involved as this was a real team effort with mention too to our Ballinabrackey girls who play their vital part in a very strong team. The trophy and presentation in front of very proud parents and friends was a fitting end to a wonderful game and a wonderful year. It was a magical moment.