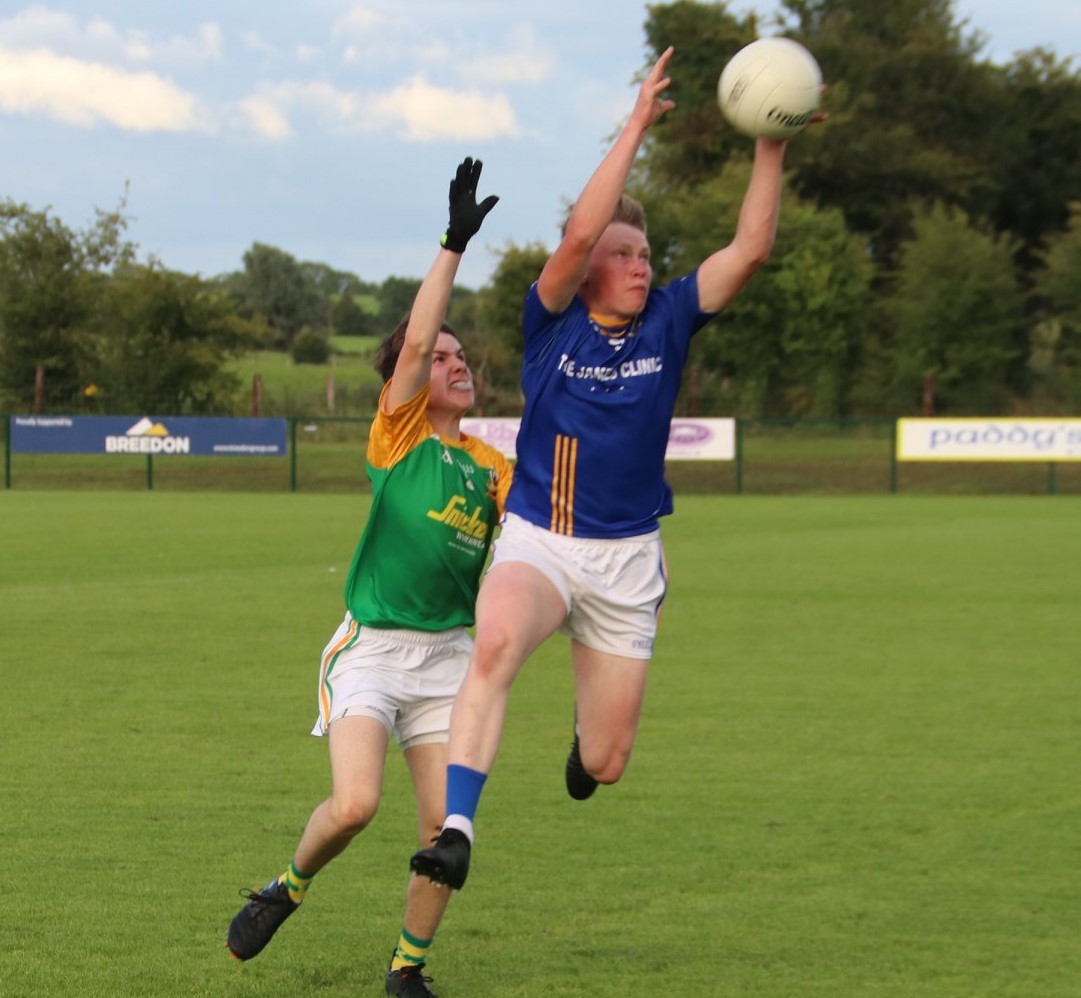 Nine years is a long time in football. In those nine years Clonard and Longwood amalgamated successfully at under-age level and won many admirers and trophies along the way. That amalgamation has now passed and during those years many boys have turned to men, and tonight in the splendid surrounds of St. Finian’s Park, many of those boys came of age as they donned a blue and amber jersey for the first time since they were 11 or 12 years old, and it suited them.

For this first round championship clash Clann na nGael arrived from Athboy and Rathcairn with a large panel meaning plenty of reserves on the bench, a luxury which Clonard didn’t have, with only 14 players ready to take on the battle, as Ciaran Murray and Rourk Shaw were unavailable on the night.

Referee Jim Rock made the short trip over the border from Kinnegad to control proceedings and threw in the ball shortly after 7.30pm as the sun appropriately made its first appearance of the day. The first score of the game was also appropriate and fitting as captain Brandon Martin set a fine example by making a marauding run from centre-back to kick a sublime opening score.

The visiting side responded with several bursting runs of their own but were met by tenacious tackling each time they ventured inside the Clonard 45-meter line. It did yield some frees from fouls as the Gaeltacht side knocked over three of those frees to take a two-point lead. It took thirteen minutes to register their first point from play which was almost immediately followed by a goal, taking a lucky ricochet from a Clonard defender. So, despite Clonard’s strong play and good possession they found themselves on the wrong end of 1-4 to 0-1 scoreline after 15 minutes.

But it did not deter these young men as a brilliant Jack Raleigh run resulted in a penalty which James Connolly duly despatched with confidence. Clonard tails were up and David Coloe added a superbly finished point to leave only two points between the sides. Clann na nGael called for the water break which possibly upset the Clonard momentum.

The second quarter followed a similar pattern as the onlooking supporters were being treated to a fine game of football. The visiting team did enjoy the majority of possession but again superb defending and turnovers by Jack Raleigh, Brandon Martin and young Dylan Duignan meant they couldn’t capitalise on that possession. Big credit also to Jim-Bob Lee, who might not be known as a goalkeeper, but his two wonderful saves prevented two certain Clann na nGael goals. His kick outs and general distribution from play were excellent too, being a vital element of the modern day GAA goalkeeper.

At the other end Clonard added two more magnificent scores from distance from the boots of midfield duo James Connolly and Justin Coyne. They were showing their opponents an exhibition of high fielding, physical power, and how to take a score. At this point, every Clonard score, tackle, and lung bursting run was been applauded and cheered from the side-line. This was a proper championship game. But the 30 minutes were up as the referee’s whistle sounded for half-time and the players could take a breath for the first time, it’s a very big pitch for a running game. The half time scoreboard read Clonard 1-4 Clann na nGael 1-8.

The second half took off just like the first had finished with both sides trading scores, Clonard’s point being another long-range beauty from the boot of Justin Coyne. But Clann na nGael’s very accurate free taker was punishing every Clonard foul at the opposite end as they edged further ahead. Big Keelan Scott did reply with a pointed ‘45’ from the ground but the visitors then hit a purple patch scoring 1-4 without reply and it seemed all Clonard’s brave efforts were in vain. Substitutions from the visitors were providing fresh legs and impetus.

Not for the first time though, Clonard heads did not drop, and they doubled their efforts as James Connolly deservedly found the bottom corner of the net to re-invigorate the side-line support once more. More applause rang around as Jim-Bob Lee brilliantly saved a penalty from the Clann na nGael sharp shooter. As the clock moved into injury time pointed frees were traded at both ends and the final whistle blew to call a halt to proceedings. This was a great game of championship football, it might be ‘Minor’ by name but was certainly ‘Major’ by nature.

Despite the result this was a special evening for the club and these young men. There were excellent performances all over the pitch tonight with Jack Raleigh’s physical and determined style yielding great rewards for his team. Brandon Martin played a captain’s role and set by example, James Connolly and Jack Raleigh were superb, cousins Dylan Duignan and Andrew Hannon were their usual unerring and consistent selves. But Man-of-the-Match must go to Justin Coyne at midfield, a colossus, driving forward at every opportunity, high fielding, physicality, turning over possession for his team on numerous occasions, and topped off by scoring two sublime points from distance.

Special mention must be also given to the youngest members of the team. In order to compete at this level, the club have had to forego an Under 15’s team this year. At the young age of 14 and 15, Dylan Duignan, Andrew Hannon, John Doyle, Kai Moloney, Shane Kelly, Rourk Shaw, Ciaran Murray and Danny Lee have all played a vital part in making this independent minor team a reality this year, and the more senior players on the team recognise that role. They have blended together and performed excellently with no fuss and it’s clear they love their football. Hats off to you lads, you too came of age tonight in the blue and amber jersey.