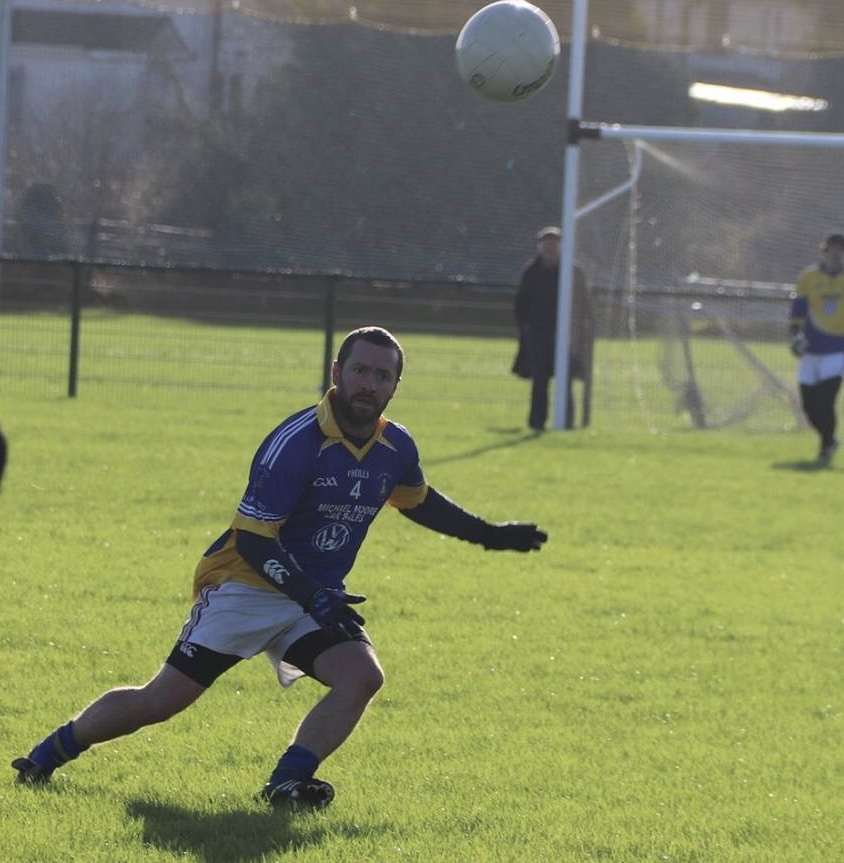 After a disappointing year for the club’s Junior side, culminating in the concession of a walkover to Carnaross in the final championship game, it was left to the Junior ‘D’ side to restore some pride and passion in the blue and amber jersey as they took to the Longwood pitch under lights in the preliminary quarter final against Bective.

The Junior ‘D’ championship is a unique experience. It brings together the “has-beens” and “have-nots” and combines them with the younger players of potential in what is always a competitive environment, just like any championship encounter. It’s one of those experiences that words can’t really describe. As the phrase goes ‘You must taste the food, not the menu.’ You just have to play in it.

Ironically, this team’s first round championship clash this year was also against Bective back in April when Bective ran out victors in St. Finian’s Park on a 4-11 to 1-11 score-line. This evening’s challenge was even tougher for the Clonard men with several of the previous day’s panel now ineligible due to subsequent appearances with the Junior A side and also due to the influential Razor Brennan flying off to sunnier climbs on Sunday. We’re sure he would have preferred to be in Longwood.

A WhatsApp group had been setup to garner all possible candidates and a single training session took place last Friday, the first time this group had been together since that April clash as the play-off spot was achieved on the back of two walkovers from Castletown and Trim, and unfortunately not because of any stellar or inspirational performances on the pitch. Burnout was certainly not going to be an issue for Clonard.

Good news starting filtering through on the WhatsApp group as the always reliable Peter McNevin was home from work abroad and was available for selection. His equally reliable brother John also gave the ‘thumbs-up’ and things were looking good for a starting fifteen. More good news was to come when Jason Moore confirmed his return from a double leg break almost one year ago and another ‘thumbs-up’ from the talented Johnny Fitzsimons added more positivity to the group. In end there was a luxury of three subs as eighteen togged out in the Longwood dressing room. The panel consisted of four Campbells and a Walsh which made the average age more akin to a bingo drive-in than a championship match.

The game threw in shortly after eight o’clock and immediately it was obvious that Bective were the far fitter side and had benefitted from last week’s narrow win over Castletown. Their domination around the middle third particularly was causing Clonard plenty of problems. It was Clonard though who registered the first score of the game via the boot of David Doyle who was showing glimpses of his well-known footballing abilities. The score however seemed to instil urgency in the opposition as Bective then registered the next two in a row before the ageless Niall Walsh gained parity on the 13-minute mark.

Then Bective again kicked three consecutive points before Walsh stopped the rot with his second point after he had hit two narrowly missed frees just wide of the left-hand post. Clonard’s veteran players were battling and showing plenty of footballing ability all around the field, the ability just couldn’t be matched by their legs and arms. Former Longford native Philip O’Donnell was one of the many obvious talents among them as he won every ball that came his way and distributed cleverly.

However, Bective continued to dominate with their forward play despite some great defending from Clonard’s younger representatives including 19-year-old Jack Donlon and the two Aarons, Duignan and Maguire, all possible Junior A players next year should they be able to commit. Clonard did register another two deserved points at the road end before the interval, one from the always lively Cyril Treacy when he pointed a fine effort. The half time whistle sounded as Bective led 0-8 to 0-4.

Both teams strolled back to their positions for the start of the second half as once more you could hear the children’s inspirational shouts of ‘Well done Daddy!’ and ‘Go Daddy!’ among the supporters. While these shouts are not unique to Junior D football, they certainly are more commonplace in comparison to higher level championship and are another great feature of this football grade. However, those inspirational shouts weren’t enough for Clonard as Bective registered a crucial goal just five minutes after the restart. They moved the ball well through their lively forwards and struck a fine powerful effort to the top corner of David Campbell’s net. We doubt even Paul Sheridan would have stopped that one, although we’re sure he’d say differently.

Clonard’s response to the goal was a typical one from this group of men as both Jason Moore and Niall Walsh fired over the Bective crossbar to leave just five between the sides. The runs of Leitrim native Dermot Sheridan were proving fruitful for his team as he continually evaded his opposition marker. Then Clonard received another blow when goalkeeper David Campbell went off injured but was very capably replaced by Barry Connolly, who did little wrong in an unfamiliar position, for the remaining ten minutes as his side threw caution to the wind in an effort to close the deficit further. Alas, it was not to be as Bective responded with two points of their own and despite a brilliant late point at distance from the left boot of Ian Campbell they deservedly claimed the spoils and go on to play Longwood in the quarter final next week. The full-time scoreboard in Longwood read Bective 1-12 Clonard 0-8.

Despite the loss there was no sense of disappointment among the Clonard group as the overriding emotion was one of pride and enjoyment. The dressing room was a jovial place with plenty of post-match banter, reminiscent of many years ago when a lot of this group were at their peak. Bainisteoir for the day, Meath legend Kevin Foley, along with physio and brother Frank, gave great words of encouragement to the group and Kevin was correspondingly thanked for his wonderful role in Clonard football.

Then came the most important and poignant contribution of the day when a visibly emotional Bective bainisteoir addressed the losing dressing room and paid tribute to the late Greg Hogge, who captained Bective in that first encounter in Clonard back in April. Greg tragically passed away shortly after that game and the Bective manager stressed the importance and emotion of today’s game to his players and thanked Clonard for their role today’s game. A contribution that puts football into perspective. Ar dheis Dé go raibh a anam.