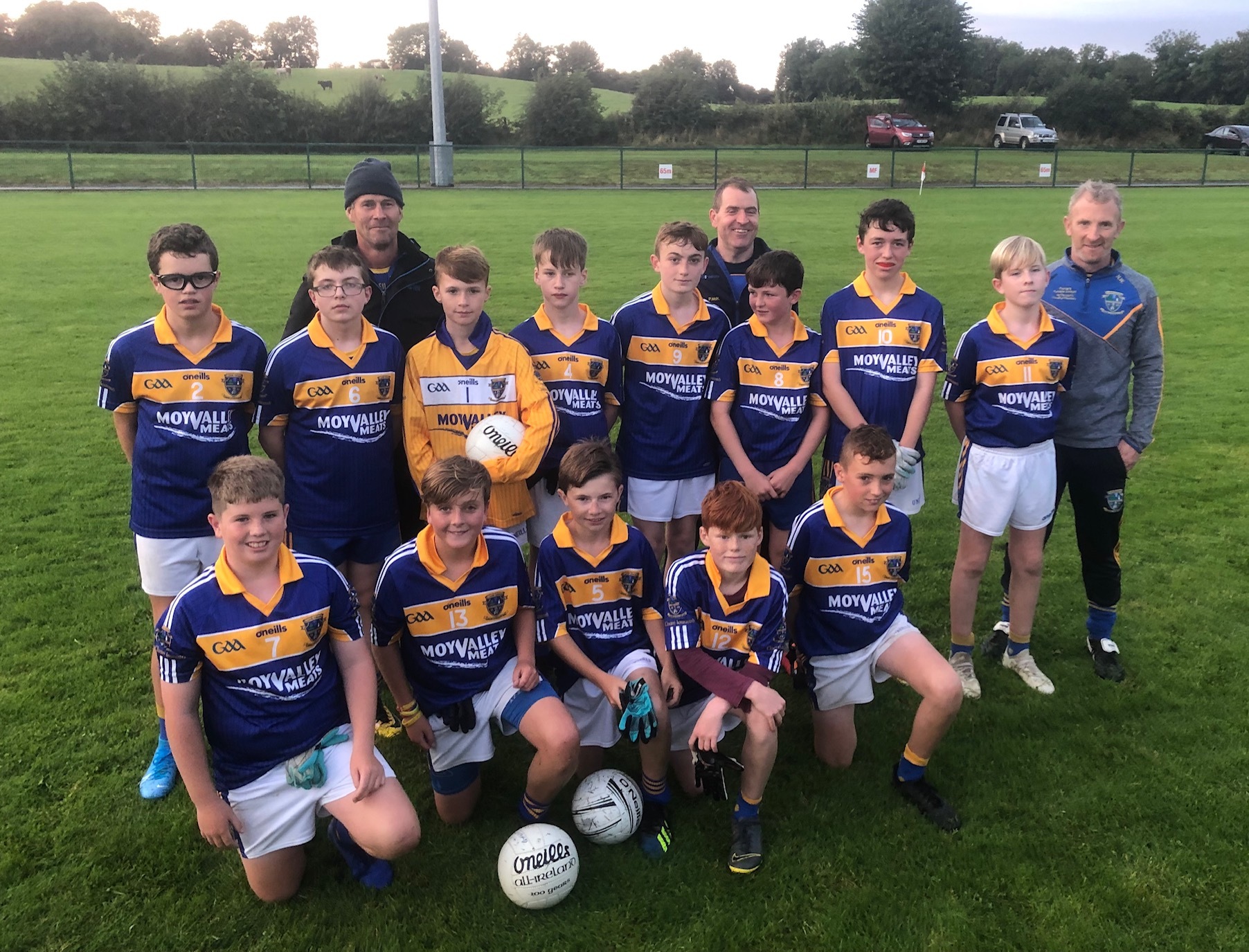 Photo: Clonard’s U14 team and management after their brave display in Ballinlough

In their second final of the year Clonard’s Under 14 boys made the long journey to Ballinlough to play the home side in the Roinn 5 shield final on an extremely wet August evening. Credit to the hosts though on their excellent pitch, one of the finest in the county, as there was never a question of it being unplayable, the first of a few similarities between the two clubs.

A question could be asked however as to why a final is not played on a neutral venue, and at a venue of relative equal distance from both participating clubs. The official line says tells us that it’s because of Dunganny’s unavailability due to remediation works, and therefore it’s not just Dublin who get home advantage in important championship games.

Another similarity between both clubs is their now independent fielding of a juvenile team after many years of amalgamation. Clonard previously fielded as Clonard\Longwood and Ballinlough as St. Olivers with Moylagh and St. Brigids. However, Clonard’s panel did appear numerically lower, lighter and younger than their opponents as they fielded the bare minimum of 13 with no subs, missing only Kayden Plunkett who flew out on holidays earlier in the day.

So Clonard took to the field as underdogs, having not competed in the Summer League due to some players unavailability but still being promoted to the higher division following their Spring League campaign which took them all the way to that final in June. But no-one told these boys they were underdogs because as usual this group were not found wanting in the commitment or talent departments.

They stormed in to an early lead to notch 1-2 inside the first ten minutes holding Ballinlough scoreless, who managed only four wides, due in the main to intense pressure from the committed Clonard defenders. Clonard’s scores came from the boots Niall McHugh and Kai Moloney with two excellent points from play and a thumping finish to the net from Ciaran Murray following a superb pass from Daniel Johns.

At the back Clonard’s defence were heroic, full back Andrew Hannon was marshalling the tall Ballinlough full forward brilliantly restricting him to feed off scraps throughout. Rourke Shaw’s tigerish tackling turned over possession for his team on numerous occasions and Dylan Duignan’s positioning, handling, and distribution was a joy to behold.

However, as expected Ballinlough brought themselves back into the game as they scored the next four points in a row with Clonard now kicking the wides in what was a role reversal of the opening ten minutes. Then the home side struck with a crucial goal of their own as their nippy forward broke free on goal. His initial effort was wonderfully saved by Kian Campbell, but the broken ball was scrambled to the net at the second time of asking despite Andrew Hannon’s last gasp attempted block on the goal line.

But once again Clonard responded with their usual determined character, character beyond their tender years with nine of the thirteen players still eligible for this age grade next year, and six eligible for two more years. Again, Niall McHugh and Kai Moloney pointed efforts with their second scores to level matters before Ballinlough responded with a point on the half time whistle, leaving it Clonard 1-4 Ballinlough 1-5.

After four minutes of the second half Ballinlough struck with their second goal and many of the onlookers would have thought that Clonard’s challenge would now surely fade, but not this bunch, as they matched the skills and efforts of their more physical opposition all over the field. Captain John Doyle pointed a sublime effort from play and Niall McHugh was denied what looked like a certain goal when the keeper managed to block his effort on the line on two occasions.

More goal chances followed for Clonard as Ciaran Murray was enjoying great possession in the final third as he whistled one effort wide inches outside the right post with another blocked by the now very busy Ballinlough goalkeeper. Young Murray did get some reward for his efforts and fine running with a point in response to two points at the other end for the home side.

Clonard continued to push forward with strong running from Darragh Kirrane and Krystian Szarnas who set up plenty of attacks for their teammates. In the forwards Aaron Scott and Shane Kelly worked their proverbial socks off and weren’t found wanting when the ball came their way. Predictably though the constant Clonard pressure and pursuit of a goal left opportunity at the other end as Ballinlough finished with the last two scores of the game, leaving the final score-line Clonard 1-6 Ballinlough 2-10.

It was disappointment for this group once again as local stalwart Sean Smyth presented the shield to the local captain of the victorious Ballinlough team. The Clonard boys shook hands and clapped their opposition, then posed for their group photo. As usual they conducted and presented themselves impeccably and are a credit to their club, family and friends. It was then time to take the long drive back home with an important stop-off in Morans ‘The Hill’ for refreshments. It was enjoyed in a special atmosphere, created by a special group and many thanks to James Moran and staff for so kindly sponsoring the food and welcoming everyone back to such a 'homely' location.

All that was left for everyone was to retire home to bed and reflect on what has been a wonderful year. This group has improved with every game and punched above their weight so many times when little was expected of them. Credit to their coaching team of Paddy McHugh, David Hannon and Niall Walsh who dedicated their time and vast experience to these wonderful boys. At the end of this night and year, all players, parents and supporters put their head on their pillows feeling very proud and justifiably hopeful of future success. This year was character building. Well done to all involved agus Cluain Ioraird abú.