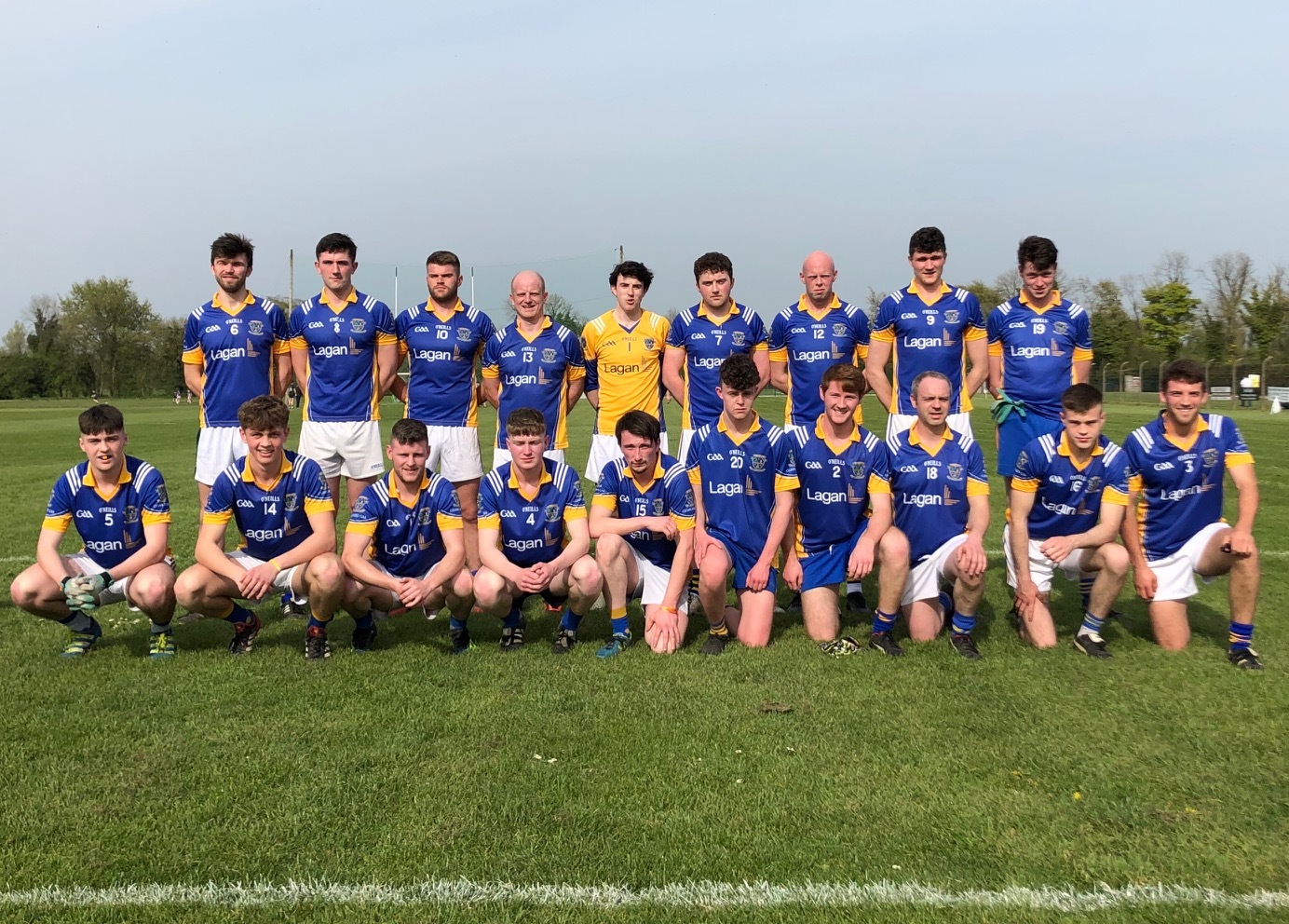 Photo: Clonard Junior team before their championship clash in Kildalkey

Round two of the Junior Championship saw Clonard take on St-Ultans in a sun drenched and well-appointed Kildalkey grounds on Easter Saturday. A lot of pre-match talk around this fixture centered on the strength and experience of the Bohermeen men should be too much for Clonard. Talk also focused on the towering midfield battle of Flanagan vs McBride and the fast-youthful forwards of Ultans versus Clonard’s tight marking back line. One thing was for sure, Clonard were coming into this game as underdogs and if you paid your entrance fee for the 4.30pm throw in then you certainly got value for money. Pre match training and observing the Clonard men in the warmup they looked composed, focused and full of intent as they had nothing to lose following their drawn round one encounter against Moynalty.

Ultans were first off the mark with three points from play somehow finding enough space against the tightly marking Clonard backs but Clonard responded with a surging run from Adam Flanagan through the middle as he passed to his brother Dylan who brilliantly rattled the Ultans’ net. From then on Niall Smullen added another as Ultans put away two more scores. Ken Darby moved back to his forward position to try add firepower as the quality of long ball into Smullen and Mikie Mullen wasn’t sticking, largely down to the pressure Ultans put on the kicker, but both men made the best they could of it and had runners of Dunne, Jason Dowdall and Jack O’Donoghue off their shoulders, the latter adding a fine point from play and clearly showing the hunger he had to inspire his team mates.

Ken Darby palmed over another from a Smullen free which dropped short but Clonard might have identified a weak link in the Ultans armour which was to be exposed later. Clonard were right in the game but were dealt a blow just before half time when Ultans put away a goal and a point unanswered to leave it 1-11 to 1-06 at the break. Both sets of players returned to the dressing rooms to cool off from the sun on a record Easter Saturday temperature of 23 degrees.

From the first minute of the second half St Ultans drove time and time again at the Clonard defence and opened up a comfortable lead adding one from play and two fine taken frees from their centre forward Ger Rennicks, who battled all day with Dylan Flanagan and Ger Foley for kick outs. Mikie Mullen and Ken Darby added two points from play to start what would be a Clonard revival with ten minutes to go as Ultans had a comfortable seven-point lead. Clonard showed great heart and are never beaten until the very end. Dowdall and the two Flanagan brothers stood tall and won primary possession from kick outs as some old-fashioned football was to be seen with a long ball pumped into the square to earn a free on the edge of the 14-yard line. Niall Smullen bravely kicked low and hard and the ball ricocheted into the Ultans net once again.

Four points down and the Clonard players and supporters could sense a comeback and with five minutes or less remaining they were to expose Ultans again in the square. For the umpteenth time it was the very impressive Adam Flanagan who climbed high to claim possession from the Ultans kick-out which was followed by a crossfield ball to Dowdall who launched another high ball into the Ultans square. It caused panic again as the ball bounced about before Ryan Raleigh collected and kicked to the Ultans net to leave just the minimum of one point in it.

With time just up and most unsure how much injury time was to be played this was all Clonard again as Ultans kickout was broken down by Dylan Flanagan and as Paddy Coyne and Jack O’Donoghue moved the ball up past the Ultans 45-yard line you could feel a draw might be rescued. Unfortunately, with Clonard in the driving seat, the referee blew full time and shattered the comeback dream and St Ultan’s breathed a huge sigh of relief.

As they say nothing is won in April and the large crowd of supporters witnessed great heart and some fine football by the two sides. St. Ultans will certainly go into the final rounds of championship in August with a favourites tag but anyone who seen this match might rethink Clonard’s underdog status as they showed great heart and determination to almost claim a share of the spoils in Kildalkey. County footballers and hurlers will now go back to their county duties, leaving certs students will study hard, club teams will complete their league fixtures, and players will heal the injuries. It will also allow management time to regroup and prepare for the next round later this summer.