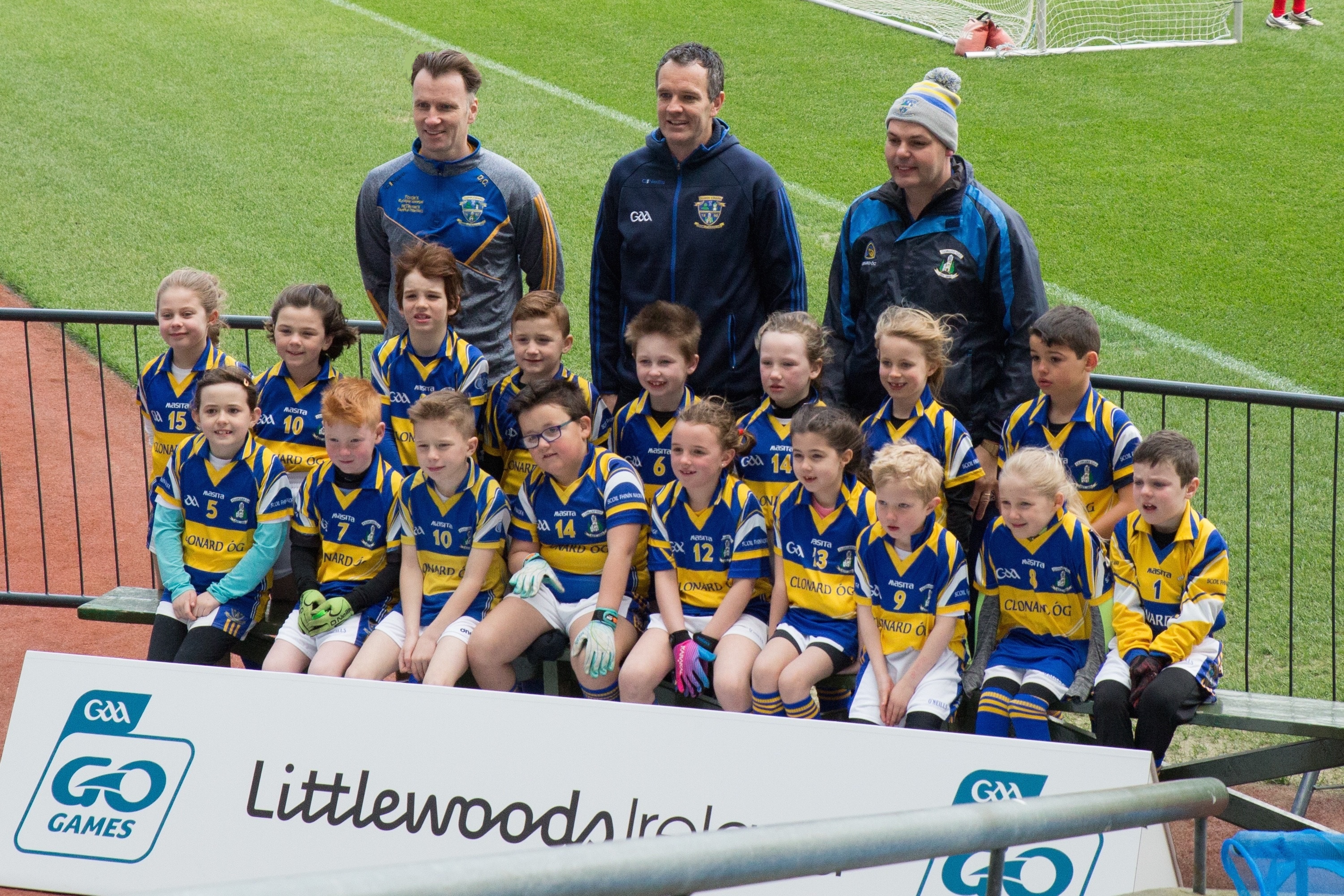 Photo: Clonard Under 8 Boys and Girls team photo before their game in Croke Park today

All gaelic footballers and hurlers dream of the day they hope to have the opportunity to play on the hallowed turf of Croke Park, our national stadium, GAA headquarters, and one of the largest stadia in Europe, third only to the ‘Camp Nou’ and Wembley.

Well today Clonard’s youngest team members, our Under 8 boys and girls, got to achieve this dream under a wonderful GAA initiative that is ‘Go-Games Croke Park Play & Stay Day’. In fact, it was the second time in four years that Clonard received the invite, recognition of the great progress and work being done at underage level in the club.

It was an early start for the children and their parents as the bus left St. Finian’s Park shortly after 8am. The excitement was huge, the only question being whether it was the parents or children that were the more excited. Croke Park Stewards met the Clonard contingent as they descended from the bus in the Davin Stand Car Park and it was immediately clear that this was an extremely well organised day. Various appointed stewards met the group along the way to assist with every step of this wonderful experience, all meticulously planned and made very straight forward for the visiting clubs.

After donning their boots and receiving their jerseys the team and coaches posed for their official team photo and were raring to go. In to the dressing rooms they went for a quick tour and then to the internal warm up area under the Cusack Stand. It was in the warm up area that Clonard met their opposition for the day, Ardclough from Celbridge in Kildare. Ardclough chanted their club name as they were about to descend down the tunnel but the Clonard boys and girls weren’t to be outdone and responded with their very vocal chants of “Clonard, Clonard”. The door was opened by the steward and they ran down the tunnel on to the Croke Park pitch, what a moment for these boys and girls, and an emotional one for their parents and coaches.

The match ball threw in and it was clear that the Clonard bunch were inspired by their surroundings. They played some truly fantastic football, showed wonderful skills, and kicked five scores in a row before Ardclough responded. At half time the remaining half of the Clonard squad took the pitch and played with equal skill, confidence and vigour. It was obvious that there’s certainly a lot of good happening in Clonard football at the moment.

The match finished with the customary go-games handshakes between both teams and it was then up the steps of the Hogan Stand to lift the cup. Another wonderful piece of a fantastic day. Then it was back to the bus for the journey home which had a pit-stop in BurgerKing for some well-deserved refreshments.

Today was a day that the children and parents will remember forever, a memory for a lifetime, and a day that exudes everything that is good about the G.A.A. Well done to everyone involved and mention to our usual Under 8 coaches, Theo Orton and Martin Hanly, who unfortunately couldn’t make todays trip due to already made family engagements. Cluain Ioraird abú!