Clonard’s club team of the week 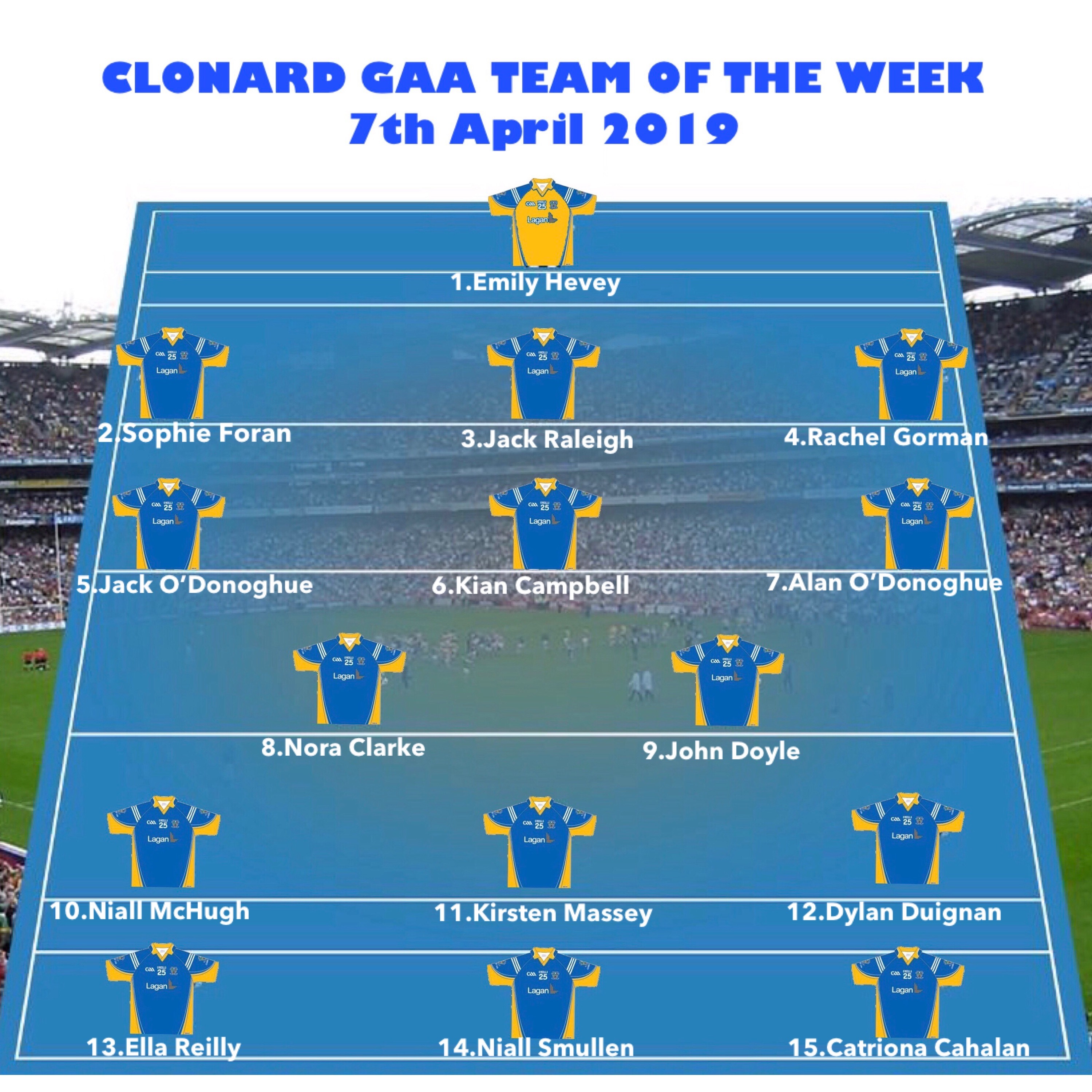 Following an extremely busy week of football across all sections of the club the P.R.O.’s have put together a selection of players from all teams who were in action, with our Under-14 girls the only team not to take to the field last week.

Should this format prove popular please keep an eye out for future teams which will again be selected on a random basis and will always include fifteen new names on the list.

Well done to all our players across all teams in the club who continue to play wonderful football and do themselves proud each week. Clonard abú!

A super performance from the young netminder against Trim, saving a penalty as well as numerous Trim goal attempts that ran in to double figures. Becoming a better goalkeeper with every passing year.

Played at full back with confidence for her team and had the honour of captaining the side in their convincing win over St. Colmcilles by the seaside. Always led from the back and has an attitude that’s makes her a pleasure to coach.

In a tough defeat against a very strong Trim side in Division 2, Jack displayed great strength and composure under pressure when his team needed him most. A towering personal defensive display on a tough day at the office for his team.

A star of the show playing at wing back for Clonard Ladies against a skilful Trim side. Never gave up on the day and showed great example to her team mates under constant pressure from superior opposition on the day.

This young man showed how important a runner from half back can be to his team in the modern game. Covered every blade of grass in Athboy and always completed his pass successfully, while defending stoutly under a wave of second half Moynalty attacks.

Broke up several Moynalvey attacks from centre-half back and got on the scoresheet with a superb point in the second half when his team were under pressure. Then he topped off a great week when performing admirably in goals for the Under 14’s in their 14-point win over Drumconrath/Meath Hill.

Joined his younger brother on the half-back line in that championship draw against Moynalty and produced one of his best performances in a Clonard jersey. In what has been a tough year personally for these two brothers their late father would be very proud.

This young lady possesses all the required skills of a talented footballer and they were a joy to watch at St. Finian’s Park last Saturday in the Under 16’s dramatic one-point win over Moylagh. Her fitness knows no bounds with endless running up and down the big Clonard pitch.

Distributed the ball with perfection from midfield to his forwards in their first-round win in awful conditions on Thursday night in Clonard. Also contributed 1-1 to his teams tally in what was a leader’s performance and set a fine example for his younger team mates.

This midfielder left everything out on the pitch with 100% effort in his team’s disappointing one-point defeat to Moynalvey. Picked himself up a few days later to score 1-5 from corner forward with the Under 14 team in their win over Drumconrath/Meath Hill.

Another shining light in Clonard Ladies football. The talented county player spurred her team to victory over a very strong Moylagh outfit with great ball carrying, accurate shot taking, and sublime passing, while also scoring a very important 1-2 in a close and entertaining game in Clonard.

Another very naturally talented footballer in our underage ranks. His foot passing and vision when under pressure were a joy to watch in ‘The Park’ on Thursday. Topped off a great display when making an astonishing goal-line clearance just as the opposition were taking a foothold in the game.

Another special talent in a special Under 16 girls’ team. If there was an entrance fee to St. Finian’s Park last Saturday, then it would certainly have been worth it to see Ella in action. Lead from the front, linking play, and scoring a very impressive 2-7 of her team’s tally.

Last year’s Meath minor made his adult championship debut in Athboy on Sunday and didn’t disappoint. Winning two first half penalties, scoring one on the rebound, he was a constant threat to the Moynalty defence. His accuracy from frees also contributed significantly to Clonard’s share of the spoils.

A newcomer to the Clonard ranks and a great addition to the team. She had the honour of captaining the side against Clann na nGael as they registered their second win of the week on Sunday, when a semi-final place was almost guaranteed with three group games remaining.