Championship honours even in Athboy 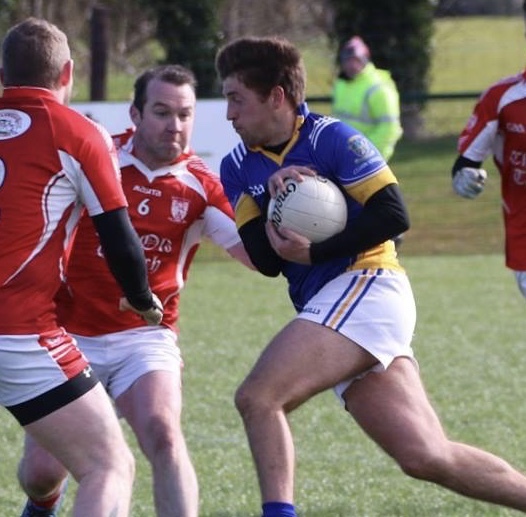 When the GAA calendar is released each year there's only one date that any club player looks out for and that's championship. There are often many theories on how a team can perform throughout a year, be that momentum, league success, fitness peaking, etc. But all that can become irrelevant come championship time, as was the case on Sunday in Athboy as underdogs Clonard took on Moynalty on a blustery and cold, but pleasantly bright day.

Whether by intention or not, the Meath CCC had made a great appointment in a double header in Athboy with first up being Ballivor versus Carnaross followed by Clonard versus Moynalty. This gave many Killyon supporters great value for money as they share their hurlers between the football teams of Ballivor and Clonard. A great chance to see it all in a packed-out venue.

The Clonard men came into this with poor league form but they were to have most of their panel back together after county commitments in both football and hurling, along with some injured players healed up in time for championship throw-in. The one notable absentee was Jason Dowdall who’s army flight home from Syria was delayed during the week.

From the moment referee Bernard Heaney threw in the ball Clonard were in control and aided by a useful breeze as they let the ball move fast into the full forward line, causing trouble for Moynalty and drawing plenty of fouls. Clonard registered on the scoreboard courtesy of two Niall Smullen frees as Moynalty responded as you would expect, with points of their own. However, on numerous occasions they met a blockade in a great defensive unit of brothers Jack and Alan O'Donoghue, with Paul Boland shoring up the middle position.

On the next counter attack a long ball launched into the square from county man Adam Flanagan saw young Niall Smullen fouled in the square and a penalty awarded. Smullen stood up to take it but was denied by a great Johnny Lynch save but he couldn’t stop a relieved Smullen from tapping in the rebound.

The next attack saw Mikie Mullen pop over a fine effort to make the score-line 1-3 to 0-2. Yet again a Moynalty attack was broken down by sweeper Kenneth Darby who enjoyed a good first half, as he found Paul Boland in acres of space to slot over a pressure kick at the edge of the ‘D’. For a second time Smullen was brought down in the small square and another penalty was awarded, but again saved by the former Meath Junior goalie, and on this occasion, it was Ryan Raleigh who put away the rebounded effort. Moynalty rallied again and tagged on two more points from play before the break as the half time scoreboard read Clonard 2-4 Moynalty 0-4.

The second half got under way and initially lacked the same energy or excitement as the first, but referee and officials had their work cut out with plenty of battles going on all over the pitch. With the wind now on the backs of Moynalty they stepped up a few gears and really brought the game to Clonard.  As they tried to use fast ball forward much credit must be given to Clonard corner backs Brian O'Reilly and Paddy Coyne in marshalling their corner forwards so well. Moynalty did hit four unanswered points and deservedly so, as Clonard were held scoreless for the first 22 minutes of the half with just three wides to show for their efforts.

A hammer blow then struck when the North Meath side netted a goal beating captain Paul Sheridan which was quickly followed by a very harsh second yellow and subsequent red card for Conor Foley, who had been having a fine return to Championship action after a two-year sabbatical in Canada. The men in blue and amber were now down to fourteen and with just six minutes remaining were behind by a point for the first time in the match. The game was still in the balance with the prize of a win and the first two points on the championship table at stake.

Moynalty were also reduced to fourteen men when their forward received a straight red for what looked to be a lashing out on Alan O'Donoghue. Then two lung bursting runs from Flanagan and O'Donoghue up the big Athboy pitch saw them rewarded with frees, once again at the edge of the ‘D’, and Smullen calmly slotted them over once more.

One point down and chasing the game two minutes in to injury time Clonard broke down another Moynalty attack and again countered with great credit to Flanagan once more as he struck firmly off his left boot and the ball flew over the bar to draw up a very exciting game. Full time score 2-7 Clonard to 1-10 Moynalty.

In the end the county player, and easily the fittest man on the pitch, saved the day but in hindsight Clonard could have won or lost this game because it was such a close battle with plenty of missed chances at both ends. Lots of lessons will be learned by players and management as another tough task lies ahead on Easter Saturday when round two is played in the fantastic Trim GAA grounds against last year’s relegated team from Intermediate, St Ultans, who undoubtedly will bring more intensity to the game.

A mention of a man of the match, it would go to one of the two O’Donoghue brothers at half back, or Conor Foley who kept the shackles on Moynalty’s danger man Paul Lynch. They were involved in so much but most importantly defended like demons and ably assisted by their team mates in attack. A special thanks and a very nice touch must go to the families, friends and supporters who hung on until the team came off the pitch to congratulate players and mentors. See you all in Trim.