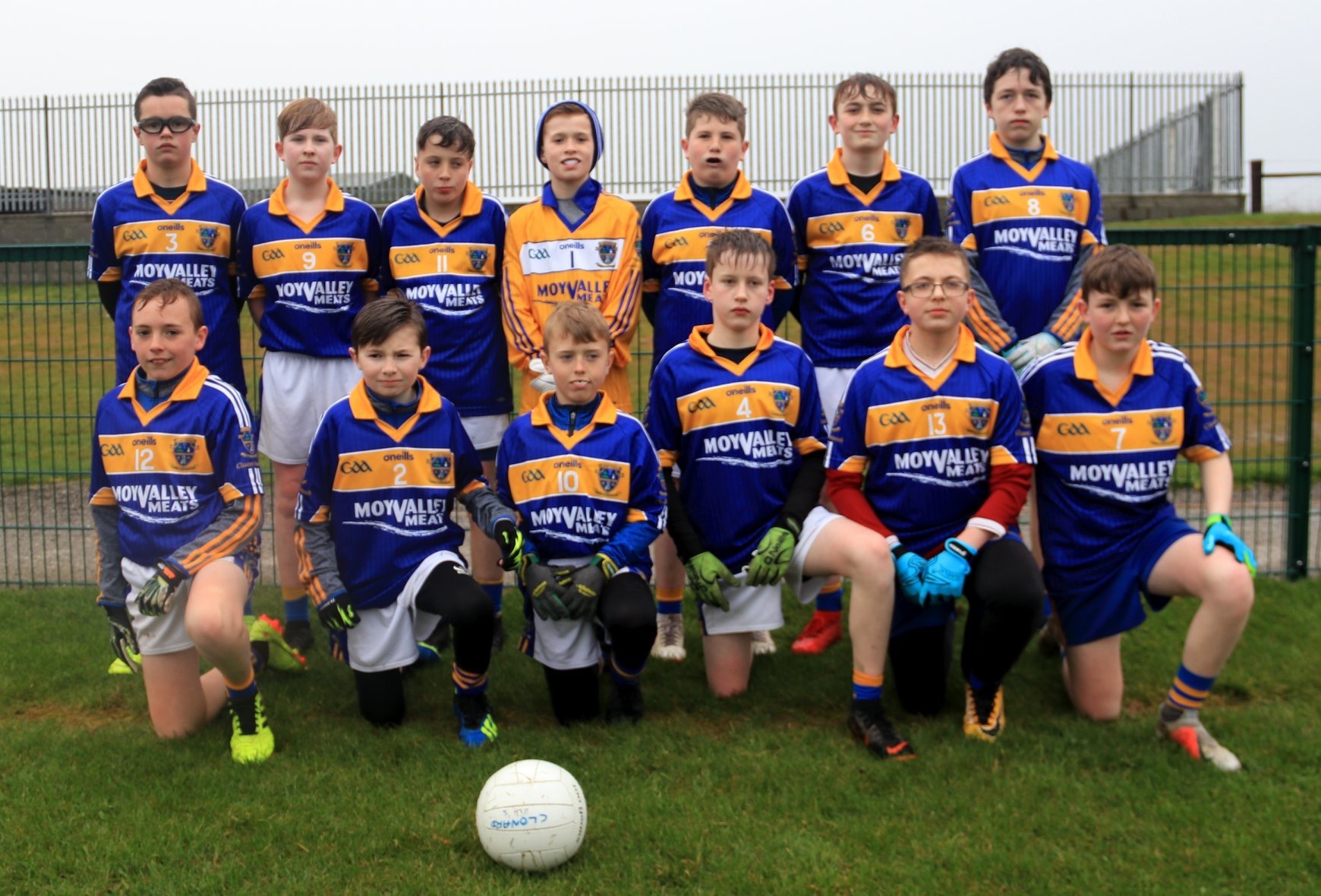 Clonard’s Under 14’s squad got their season off to a perfect start in St. Finian’s Park last night in what was far from perfect conditions. It was a bitterly cold evening with driving rain and weather more akin to Iceland than Ireland, as the thermometers displayed 2 degrees when the players, parents and coaches bravely left their cars to step out into the Baltic conditions.

The amalgamated opposition from the Cavan border arrived following their long journey from Drumconrath and Meath Hill and played their part in what proved to be a very entertaining game of football.

The local boys seemed to cater with the harsh conditions better than their visitors as Clonard raced in to an early lead of 1-4 to 0-1 after ten minutes, with John Doyle contributing 1-1 and his midfield partner Ciaran Murray also getting in on the scoring act with a point of his own. Both boys were dominating proceedings around the middle with fine runs forward, and never forgetting their defensive responsibilities.

As is often the case at juvenile level periods of dominance in matches can quickly turn and the Drumconrath/Meath Hill side grabbed their own foothold on the game. They knocked over two points and had numerous goal chances, only to be denied by a combination of great defending and excellent blocks close to goal. Young goalkeeper Kian Campbell pulled off some fine saves and commanded his area well while Dylan Duignan also came to his team’s rescue with an astonishing goal line clearance when his goalkeeper had been beaten.

But back came Clonard in to this game as accurate kickouts were winning prime possession for the team to build on, and every time the ball reached their forward line they looked dangerous. Niall McHugh was winning possession ahead of his marker and producing his trademark turn and run which resulted in a goal and two points for his side. The half time whistle sounded as Clonard deservedly retired to the shelter of the dugouts, leading on a score line of 2-6 to 0-4.

Playing against the wind in the second half Clonard coaches emphasised to need to get a couple of scores early after the restart, and sure enough corner forward Daniel Johns obliged with a goal within 30 seconds, his volleyed shot from a rebounded effort finding the corner of the net to give his side a perfect second half start. Defensively Clonard stood tall with Darragh Kirrane, Andrew Hannon and Rourk Shaw tackling tigerishly, never giving their opponents time on the ball, and breaking out from defence at pace.

Two Clonard goals followed at the other end, the first from the always hardworking Kai Moloney as Clonard pushed home their possession advantage despite the windy conditions. The latter of the two goals saw Kayden Plunkett cleverly palming to the net when a long speculative effort dropped short. The visitors also had their moments and were rewarded with a goal of their own when their lively full forward shot low under Kian Campbell from close range. A period of dominance again followed for the North Meath side but again Clonard defenders and goalkeeper managed the situation capably.

The full-time whistle arrived, much to the relief of all those in attendance, who by that point had no feeling left in their hands or toes, but it didn’t bother the Clonard contingent in the slightest as the positive result and great team performance provided all the warmth they required. Final score Clonard 5-11 Drumconrath/Meath Hill 1-9.