Agony and Ecstasy for our Under 12 teams 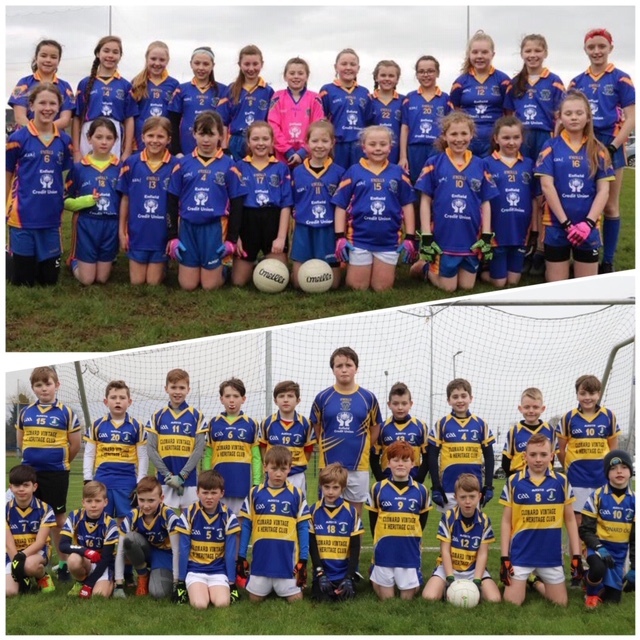 Photo: Clonard’s Under 12 boys and girls

Sunday 31st March 2019 saw both of our Under 12 boys’ and girls’ teams take to the field in their respective round of league matches. It says a lot for the growth of our club when the panels consist of over 20 players each, meaning combined registrations of almost fifty children aged eleven and twelve years of age. Only a few years ago both were joined at this age group in order to field a single team.

First up were our boys who welcomed Moynalvey to St. Finian’s Park in round 1 of group F of the Spring League. It was the first official day of ‘summertime’ as Irish clocks moved forward one hour which meant an even earlier start than the 10am throw-in time suggested. With both teams feeling the effects of an hour’s less sleep it was Clonard who struck first on the scoreboard with a point from Evan Joyce.

Scores were swapped several times during the half as it was apparent that these were two very evenly matched teams, and little would separate them during the 50 minutes. However, Clonard did edge proceedings at half time, thanks in part to a brace of points from Callum Quinn and another from the always energetic Aaron Scott. Half time score Clonard 0-7 Moynalvey 0-5.

Despite Clonard’s half time talk focusing on the importance of starting the second half well it was Moynalvey who took control of the game with Clonard's tiredness creeping in and mistakes plentiful, which these boys will learn a lot from. Moynalvey took full advantage and scored the first five points of the second half to lead 0-10 to 0-7.

Clonard then regained their lost momentum of the first half which was sparked by a great run and score by Kian Campbell to bring the deficit back to two. Aaron Scott added his second of the match to cancel out another fine effort from the visitors while Liam Gregan was performing admirably in his new position of goalkeeper with some great blocks and accurate restarts.

As the clock ticked down Moynalvey added two further scores against the run of play to lead 0-13 to 0-9 but these Clonard boys are full of spirit and scored three consecutive points with time almost up to leave the minimum between the sides, the last of which arrived from left boot of Kayden Plunkett who took full advantage of his pace to win the Moynalvey kickout. There was still time for two more Clonard opportunities, but it wasn’t to be as the visitors greeted the final whistle with relief. Final score finished Clonard 0-12 Moynalvey 0-13.

The Clonard boys left the pitch with very disappointed faces but know they can play better in their remaining matches of this group and as always look forward to training during the week. Well done boys.

Just a couple of hours later Clonard girls made the long journey to Laytown to take on St. Colmcilles in round 3 of division 4. With quite a few regulars missing on the day the team travelled with the minimum of eleven players in attempt to build on their convincing round 2 win over St. Marys.

Clonard captain Sophie Foran won the toss and elected to play in to the strong easterly wind in the first half. Scores were hard to come by for both sides in the windy conditions but Clonard knew they had more than a fighting chance in the second half, despite plenty of missed opportunities, as the half finished on a scoreline of St.Colmcilles 1-2 Clonard 0-3.

The second half saw the Clonard girls shift up a few gears as the midfield pairing of Ava Duignan and Grace Hevey started to dominate proceedings. At the back Karla Hannon pulled off a string of fine saves and was ably assisted by her excellent defence of Sophie Foran, Lily Gannon, Katie Larissey and Liz Coyne. In fact, the Clonard defence managed to keep the ‘Cilles’ scoreless for the entire third quarter.

In the final quarter the girls tired slightly with no substitutes available but continued to work tirelessly in true Clonard fashion. This resulted in outscoring their hosts by 2-6 to 0-1 in the final ten minutes as the final score-line finished Clonard 3-13 St. Colmcilles 1-3.

This was a great team performance as the girls showed great understanding and basic skills of gaelic football. To cap off a great afternoon they all headed to the beach near their match location for some team bonding and plenty of fun. Well done girls.