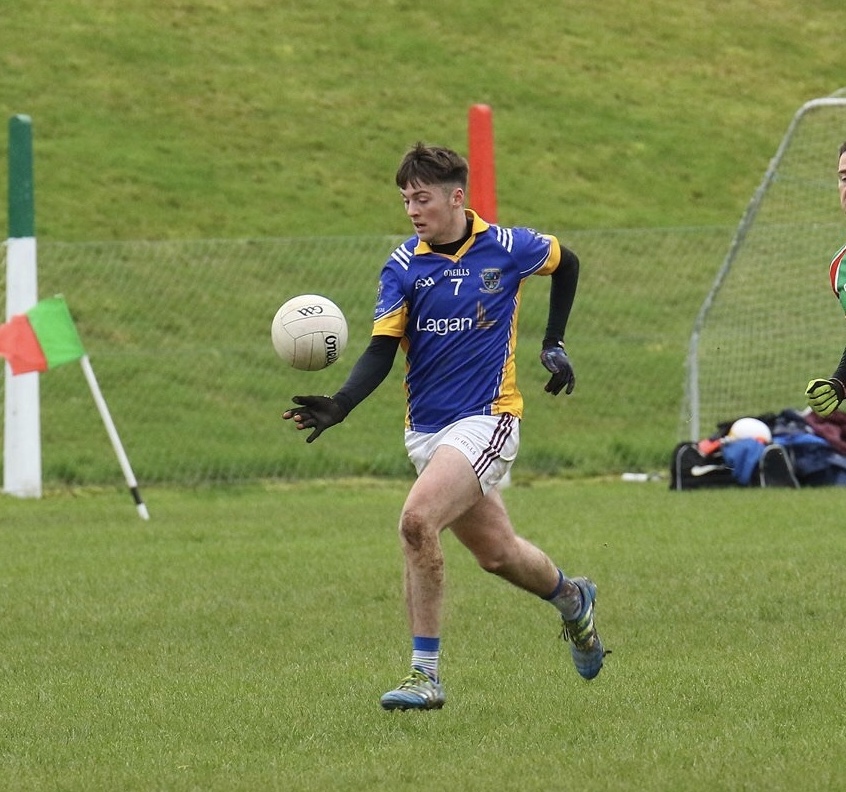 The first Sunday in February saw Clonard men’s team tog out for their first competitive game of the season in Division 4 of the league against St Marys in Donore. The team faced an early start and a one-hour drive for an 11am throw-in, after a week that was especially difficult on two young brothers on the panel, who lost their father, Dermot O’Donoghue through illness, which was respectfully remembered by a minute silence before the game. The younger of the two brothers, Jack, proudly wore the captain’s armband.

A bitterly cold morning meant a good warm up was required and to also get familiar with ground conditions, as it was borderline playable from the weeks frost and snow. New bainisteoir Fergal Foran had plenty of youth injected into this season’s panel and they have showed that they are well capable of pushing into starting fifteen. The most recent additions being Niall Smullen and Conor L’Estrange.

Referee Eamon Barry threw in the ball just after 11am but not before all umpires and sidelines were marshalled. Clonard opted to play into the very strong wind which added to the challenge in the opening minutes, but they were well prepared, as in the previous two weeks they had given a good account of themselves with challenge match wins over Cappagh from Kildare and Westmeath side Ballycomoyle. However, a different challenge lay ahead with Marys going into a 2-point lead straight out of the blocks enjoying the room Clonard allowed them as well as wind advantage.

Fifteen minutes in and the home side were three points up, Donore’s spell of control started to be handled by Clonard as management sent Ken Darby to take up sweeper and Cyril Treacy coming back to mark his man, they started the battle up hill and two great scores by last year’s County Minor Niall Smullen showing how much he will have to offer along with the rest of the young chaps.

Mary’s were now battling to win their own kick outs and used the spare man cleverly, much to the frustration of the Clonard forwards. Two more quick scores from Marys Full forward line had Clonard’s backs Johnny Campbell, Paddy Coyne and Brian O’Reilly really at their full tilt to keep things well marshalled. A wide from a tight angle from Shane Dunne was the second of the morning showing how much of a factor the wind was having on proceedings.

Dylan Flanagan towered over the next kickout and a nice movement upfield through Eoin Connolly and Jack O’Donoghoe saw Clonard hit a blockade on the 20 metre line, as encountered on a few occasions already by Eoin Connolly and Stephen O’Reilly, but they recycled well and Shane Dunne found Mikey Mullen in space with a great cross-field pass to take on his man and score a fine effort showing exactly what he has to offer. Two more from Smullen before the half time whistle had Marys ahead 7 points to 5, which with the limited possession Clonard had, was as good as they could have hoped for as all players headed to the warmer dressing rooms.

Foran made Clonard aware the second half would need significant improvement and not to think the wind advantage would get them over the line. He predicted a last ten-minute dogfight which was exactly what the supporters got. From the throw in St. Mary’s won possession and had a couple of wayward shots at the target before realising how tough it was for the men in blue and amber in the first half. Smullen, Dunne, Flanagan and Mikie Mullan all had a go to test the wind factor before a brace of Smullen frees got things back on level terms. Mary’s didn’t lay down and tagged another, before a high ball into the Clonard small square caught out Paddy Coyne and netminder Paul Sheridan with with resulting Marys corner forward tapping the loose ball to the net.

Two pairs of fresh legs entered for Clonard in Ryan Raleigh and another debutant Conor L’Estrange both eager to get into a starting 15. They worked hard while coming into the fray, two more Smullen frees had Clonard one off drawing things up. Two goal chances deflected, one fine save from the keeper and the second hit the post from Raleigh. Neither John McNevin or Dunne could get a hand to it, but on the stroke of sixty minutes Clonard’s tails were up with young L’Estrange, O’Reilly and Paddy Coyne clearing long efforts into the Clonard 13 metre line and a superb effort the following end saw Niall Smullen yet again draw up the match 1-10 to 13 points. Clonard could smell blood but with the next kick-out saw Eamon Barry blow full time.

A strange scene as fans, management and opposition players looked at each other to say “Is that it?” Most thought there was still time on the clock and of course both looking for the full brace of points for the league table but both had to be content with a share of the spoils. The future looks bright for this young side and with the county hurlers, Adam Flanagan, and two other travelling men the side will go from strength to strength in the coming months, coupled with new management team of Fergal Foran, and selectors Kevin Foley and Ian Campbell, most will have high hopes for the year ahead.

Special mention must go to the travelling supporters who braved the cold, thank you, and to St. Mary’s on their superb new facilities, dressing rooms and showers. It made all the difference yesterday, and for putting on tea at the new hall for their visitors.