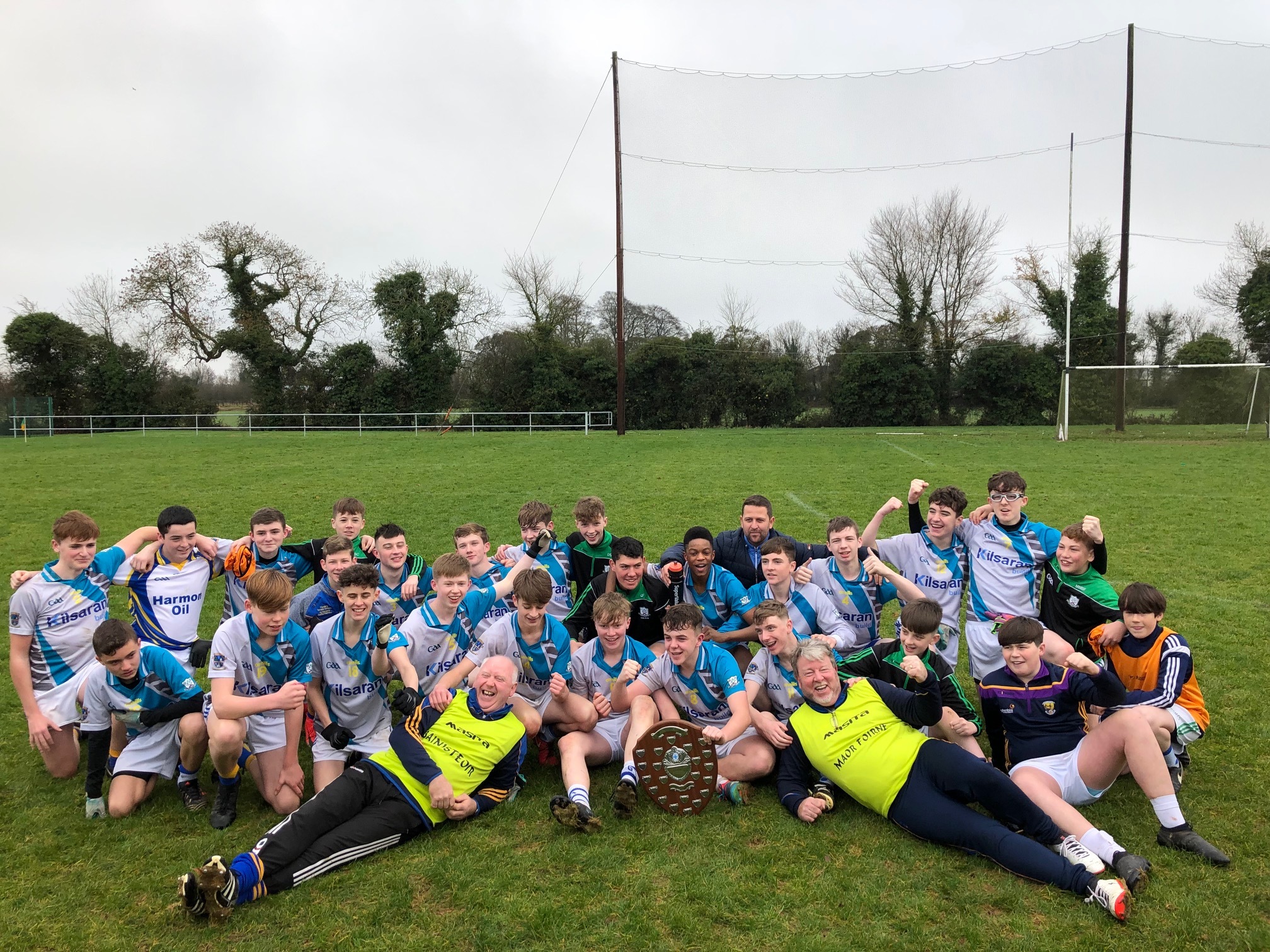 Our wonderful national sport of gaelic games is often referred to as a summer sport, but on the first day of December, just as Christmas trees were starting to go up around the country, it coincided with plenty of scintillating GAA action in Dunganny today, with three finals taking place in unison, two football and one hurling with 10am throw-ins in Meath’s centre of excellence. However, all Clonard and Longwood eyes were only focused on pitch number one, as another talented amalgamation side took on an equally talented St. Peters Dunboyne.

These two young teams had of course met already this year with Dunboyne running out convincing winners in round 5. In fact, this Dunboyne team had demolished all their opponents by similar convincing margins and went in to this final as odds-on favourite. However, not even the great Paddy Power could have predicted the game that was about to unfold in front of the large, and very lucky crowd of supporters in Dunganny.

St. Peters started the game the brighter as the favourites tag didn’t appear to weigh them down. They notched the first two scores but were having nothing easy as the amalgamation side were clearly up for this rematch and battling hard for every ball. Their battling efforts were rewarded after 7 minutes when a wonderful move, started by Justin Coyne in the centre back position, made its way to James Connolly outside the 13-metre line. There was only going to be one outcome as Connolly rounded his marker and fired low and hard to the back of the net. A wonderful finish.

Dunboyne weren’t phased and continued to edge the possession stakes as they notched two consecutive points from play to retake the lead. But once again Clonard/Longwood got reward for their determination and spirit as the ball broke to full-forward Tadhg Connolly and the Longwood man stroked it soccer-style past the helpless Dunboyne keeper. The lead had changed hands again before Dunboyne reduced the margin to the minimum from a placed ball. Clonard/Longwood again responded in typical fashion, but not with a goal this time, instead with a free from Sam King and a point from play by James Connolly. The amalgamation side were now ahead by three.

Dunboyne once again showed their qualities as their direct running was causing problems for the Clonard/Longwood defence and frees were inevitably conceded. The Dunboyne marksman was unerring in his accuracy as he floated over three dead balls in a row to level the scores. And it could have been worse for Clonard only for a superb and timely interception by full back Jack Raleigh when a fisted pass by the oncoming Dunboyne forward seemed destined for his team mate in front of goals, only for Raleigh to punch clear and prevent a certain 3 pointer.

Clonard/Longwood attacked again and moved up the field, with Justin Coyne demonstrating his fine high fielding skills throughout the half. Then Clonard man Brandon Martin made himself some space outside the 20-metre line and coolly slotted over to give his team the lead once again. The half-time whistle sounded, and everyone could draw breath, it was a wonderful half of football action with the score-line finely poised, Clonard/Longwood 2-3 St. Peter’s Dunboyne 0-8.

The second half got underway and unlike the first, Clonard/Longwood now looked like the more confident side and took control of the possession stakes. Paddy Power dramatically changed his odds as Dunboyne had moved from odds-on out to evens money and joint favourite, as in truth no one could predict a winner at this juncture.

Brandon Martin started the second half just as he finished the first with another fine point from play as Clonard/Longwood led by two. Both sides were fully committed with mistakes now creeping in and the wides count rising. Brandon Martin’s point had been the only score in a ten-minute spell. But then Dunboyne hit with what seemed to be a crucial blow as a high ball to the square was punched to the net. The umpire and linesmen consulted and eventually the goal stood. It was another change in leader, as Dunboyne led by one.

You couldn’t take your eyes off this game, and almost expectedly Clonard/Longwood hit the perfect response to Dunboyne’s goal, as just 90 seconds later they cancelled it out with one of their own. Scout Hanna won the ball but was closely marshalled by the opposing defender, but he managed to turn and shoot from just outside the 13-meter line which ended up nestling in the bottom right corner of the net. A brilliant and crucial goal and only Scout will know if he was going for the goal or a point, but no one will care as he great work and effort justly deserved the outcome.

Dunboyne reduced the deficit to one but this time it was Sam Kings turn to demonstrate his free-taking skills, and just like his Dunboyne counterpart in the first half, he nailed three consecutive frees. Clonard/Longwoods lead was out to 4 points with just five minutes remaining, the biggest margin of the game so-far. Crucially one of King’s frees resulted from a cynical tackle and trip from behind as Tadgh Connolly bore down on the Dunboyne goal. The Dunboyne midfielder received a talking to from the referee followed by a merited black card.

Dunboyne registered another free of their own, but James Connolly restored his sides four-point lead with another fine score from play. And just when the large crowd of supporters thought they had witnessed enough drama for one day, cue a dramatic last 5 minutes of additional time which was full of skill, tension and drama of the highest order.

Firstly, Dunboyne scored their second goal to put the minimum between the sides, which was followed by a free which landed on the top of the Clonard/Longwood crossbar and managed to bounce back in to play, with possession then changing hands several times in a frantic passage of play in front of goals. It was cleared to apparent safety before another long ball was launched on top of the Clonard/Longwood keeper, Luke Daly, who was challenged by the Dunboyne forward and the ball fell to the back of the net. Everyone in attendance knew this was the last play and several of the Clonard/Longwood players fell to their knees in despair. But wait, the referee was clearly signalling an issue with arms moving in a crossways fashion, yes, it was free out for the unfair challenge on the keeper. Luke dusted himself down, took the resultant kickout and the referee blew the final whistle, sparking wild celebrations among Clonard/Longwood players and supporters. It finished Clonard/Longwood 3-8 St. Peters Dunboyne 2-10. What a game of football.

Meath Coiste na nÓg representative Brian Kelly presented the trophy to the winning joint captains Sam King and Justin Coyne, and spoke highly of both clubs and of their bright futures, and rightly so. Sam King’s acceptance speech made specific reference to Dunboyne’s qualities and included all the customary thank yous. This included thanks to coaches Finian Coloe, Kevin Moriarty and Stephen King as they clearly had these boys primed for action today and received their just rewards. The team then made the trip back to the Monastery Inn, Clonard, for their post-match meal, and then who knows, maybe afterwards to put up their Christmas trees, but Christmas had already come for this group of players, coaches and supporters.