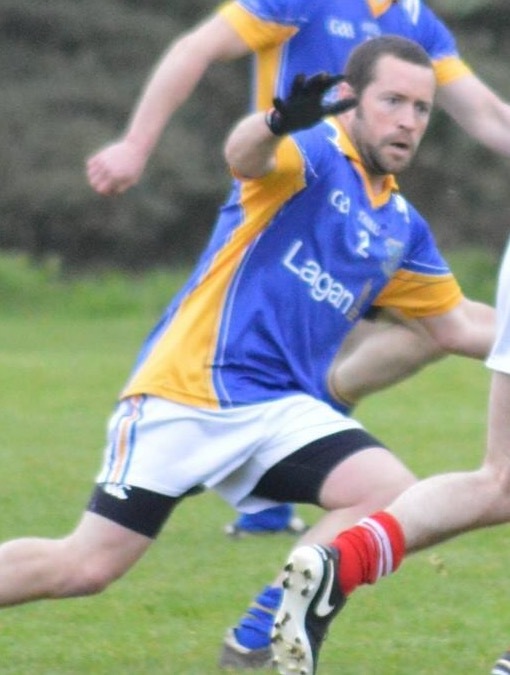 Clonard welcomed unbeaten Cortown for a round 7 division 4 clash on a windy Saturday evening on the May Bank holiday weekend. All the signs before this match was that it was going to be a mammoth task for the Clonard men, considering the oppositions 100% record and last week’ s abject performance in Donore. Added to that were the usual Clonard absentees due to county and army duty of Mikie Mullen, Brian O’Reilly, Jason Dowdall, and of course Adam Flanagan.

Cortown showed their quality from the throw-in and raced in to an early 2 point lead but Clonard replied with a point from dead-ball man Gary Raleigh. This was followed by a frantic 5 minute spell by the visitors when they carved open the Clonard defence on three occasions, but the Clonard goals remained intact when one effort rattled the crossbar, one blazed wide of the upright, and then Paul Sheridan narrowed the angles to produce a fine block.

That turned out to be the only dominant spell by Cortown as the Clonard defence got to grips physically with their opposing markers, with particular mention to fine defending from Paddy Daly, Johnny Campbell, and Ger Foley. They were more than a match for the strong and experienced Cortown forwards.

In the Clonard half-forward line Gary Raleigh was back on form, with his strong running proving a real handful for the visitors. He added a fine effort from play and another from a placed ball. However, Cortown showed why they’re unbeaten and despite the pressure were able to register two more points before the break, and went off at half time three points to the good, Clonard 0-3 Cortown 0-6.

The second half saw Clonard playing with the strong breeze in to the road end and they upped the pressure on Cortown and were rewarded within 4 minutes of the restart. Johnny Fitzsimons was the unlikely star, only starting a handful of games this year, when first he registered a white flag with a high kick from a tight angle and then raising the green flag by tapping in for goal after Kenneth Darby’s effort was parried by the Cortown keeper.

But Cortown showed their experience again as they replied with pointed efforts at the opposite end and this was turning out to be a cracking game. Clonard were up for the fight too and replied with three more efforts from frees, two from Ken Darby and a ’45 from Paul Sheridan when he made the long trip up the field from his goal-line to send it over the black spot with plenty to spare.

Then with 25 minutes gone and Cortown leading by a solitary point, came the decisive 2 minute period in the game, firstly a Cortown effort was waved wide by the Clonard umpire but over by the Cortown umpire and the referee opted to award the score. Clonard then attacked down the field and thought they had levelled the match when Ken Darby’s effort was flagged as a point by the Cortown umpire, but much to the dismay and disbelief of all in attendance the referee overruled and registered it as a wide.

There was time for one more act of drama in this enthralling game when Ken Darby fielded a high ball on the Cortown 21 yard line but the taller Cortown defender seemed to wrestle it back and the equalising chance didn’t materialise. The final whistle sounded and the joy and relief was evident by the travelling team and support as they registered their seventh win from seven games in the division, on a final scoreline of 0-11 to 1-7.

Clonard might not have achieved a deserved draw, or indeed victory from this game but they certainly showed they are far better than some of their performances in earlier defeats this year. It bodes well for championship in three weeks’ time and hopefully will prove to be the turning point of an inconsistent season thus far.