FL Div 4A: Clonard move up to third 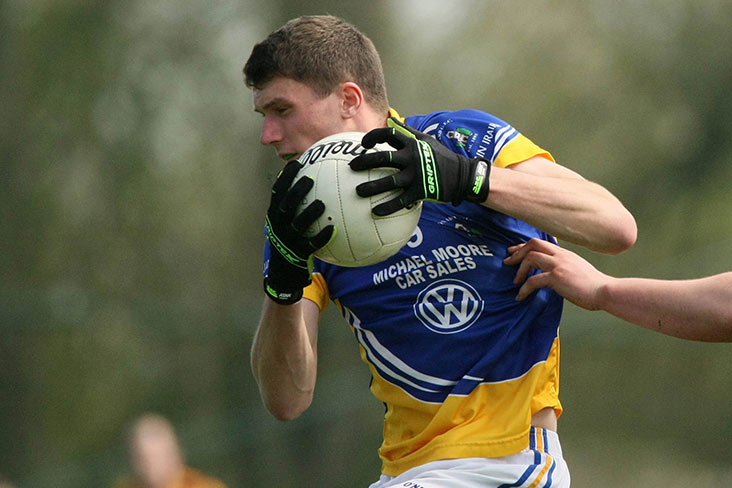 Boardsmill was the venue for this re-fixed round 3 game between Clonard and Boardsmill on a dry and pleasant Easter Monday. The original fixture in late February was abandoned by the referee with just 20 minutes played, when torrential hail and rain showers made an already waterlogged surface even more dangerous for all involved.

The evening throw-in on a bank holiday Monday didn’t suit either team with many regulars missing from both sides. Young minor Eoghan Dowdall started in the unfamiliar position of ‘between the sticks’ for Clonard with Paul Sheridan (holidays) and Robbie Quirke (injured) unavailable for selection.

Clonard registered the first score after just 2 minutes when Adam Flanagan was fouled as he bore down on the Boardsmill goals, and dead-ball man Gary Raleigh made no mistake from the resultant free from the ground. Chris Doyle, Ian Campbell, and Eoin Treacy added further points from play with Boardsmill registering just one at the opposite end.

In a first half that saw a lot of the Clonard players fielding in unfamiliar positions it was no surprise that Boardsmill kept in touch as the half progressed, despite further points from play from the two Connollys, Kenneth Darby, and Ian Campbell.

A crucial score did arrive just before break when Flanagan once again fielded supremely in the middle of the park, strode forward at speed and found Kenneth Darby in space inside the forty. Darby rounded the oncoming Boardsmill defender and shot brilliantly from 20 yards to loop the ball to the top corner of the net. That left the half-time score Clonard 1-8 Boardsmill 0-5.

Clonard started the second half superbly, responding perfectly to the Griff’s strong half-time talk, and within 90 seconds of the restart 1-1 was notched from the boots of Darby and Treacy, the latter with a fine low finish past the Boardsmill keeper. More points followed from Gary Raleigh and Treacy but Boardsmill responded with scores of their own, this time one of which was a goal as they intended to stay within reach of their opponents.

Clonard defenders made their mark on the scoreboard also as both Paul Boland (1) and Dylan Flanagan (2) split the uprights with three fine efforts. However, a price was paid for their forays forward as Boardsmill found the net for the second time and reduced the gap to 7 points. Clonard responded again though, with a third goal from the ever running Eoin Connolly when he tapped in from close range after a fine goalkeeping save from Eoin Treacy’s effort.

Paddy Melia blew his whistle for full-time with a final score-line of Clonard 3-17 Boardsmill 2-9. Clonard will have to work hard on cutting out the many mistakes but will also focus on the positives of the game, being Ken Darby’s goal, a man of the match performance from Adam Flanagan, and four points from play for full-forward Ian Campbell for the second match running. They went home happy with the 2 points in the bag, which moves them to third place and with a fighting chance of promotion with a lot of tough games ahead, starting with St. Marys in Donore next Saturday.