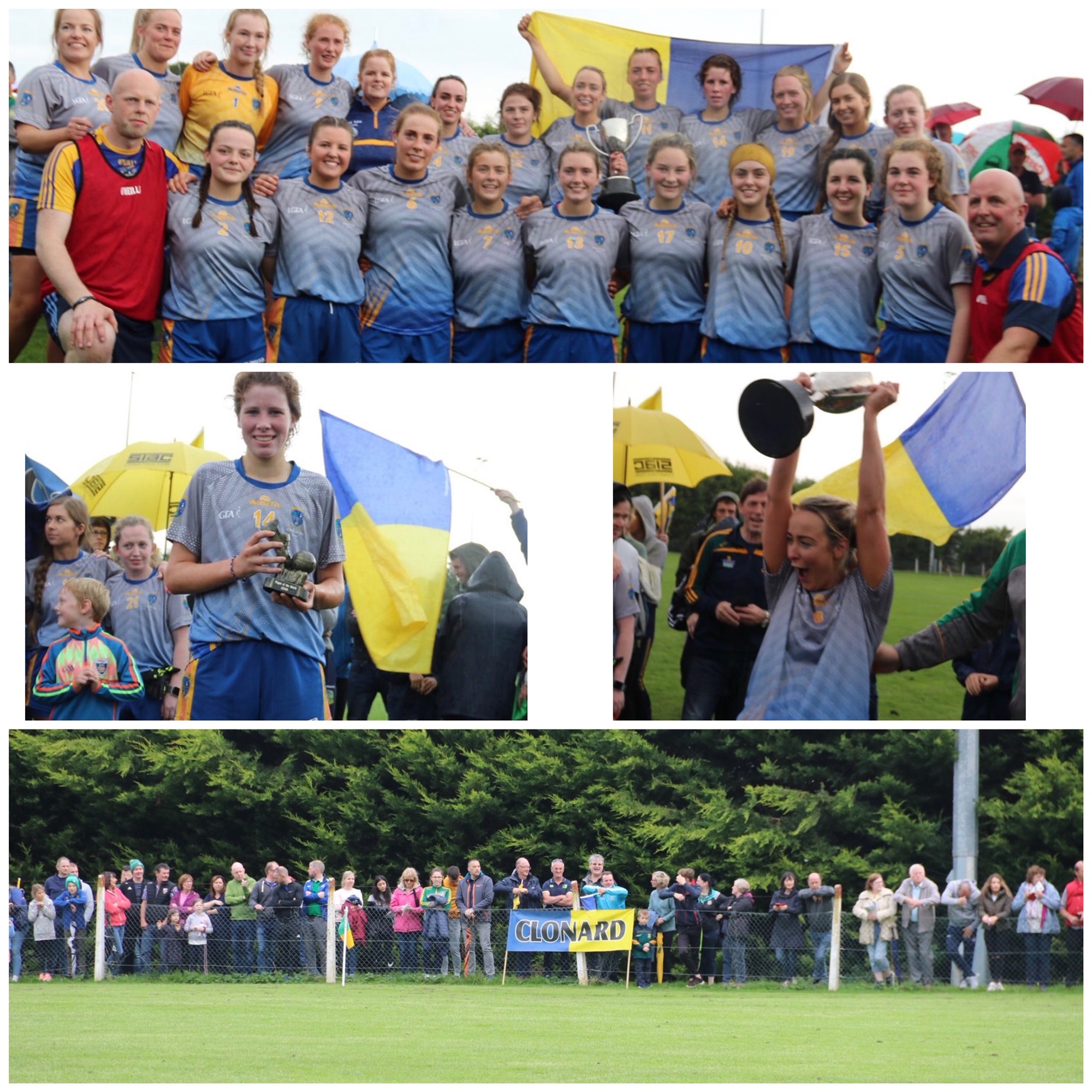 What a week it has been for Clonard Ladies, and indeed all of Clonard, following last Saturday’s events in Kiltale. If you’re a Clonard supporter and weren’t aware of the ladies Junior C championship success over Rathkenny/Slane then all we can say is ‘Welcome to Earth’.

It is the stuff of fairy-tales and sets a superb example to clubs and teams all over the country that success is achievable, even in the most unlikely of situations. For those new visitors to Earth, the remarkable timeline goes as follows: Just three years ago in 2016 Clonard girls’ underage teams fielded competitively for the very first time, something never done in the long history of the club since it’s foundation in 1895. A year later, on 18th February 2017 to be exact, an adult team was fielded in an experimental first challenge match in St. Lomans, Mullingar. The game resulted in a heavy defeat, but progress was not be deterred. Roll on two and a half more years, several under-age trophies achieved, an LGFA club of the year award, along with experienced additions from the Foley family, Ballivor, and Donegal, they claimed championship honours at adult level on Saturday 21st September 2019. A fitting culmination to an amazing three years, yet possibly only the beginning.

But back to this week. Going into Saturday’s final Clonard were strong favourites following their convincing last round group game win over the same opposition. It all looked like going to the bookie’s plans at half-time when Clonard led by 12 points, 3-8 to 0-5. But championship success never comes easy and the second half saw a strong Rathkenny/Slane side battle their way back into the contention as Paddy Power started to get very nervous.

The deficit was down to just three points with Lisa Foley in the sinbin, star-forward Kirsten Massey off injured, and Lisa Duffy appearing to be struggling with injury, and then suffering her side’s second sinbinning of the game. But cometh the hour cometh the woman, as full forward and county minor Louise Coyne netted to settle both Clonard’s and the bookies’ nerves. Yet again Rathkenny responded with a goal, this time from the penalty spot to bring it back to just two points. However, Clonard defence held firm in a very nervy long period of injury-time and the final whistle blew, igniting scenes of elation among Clonard players and supporters who travelled in great numbers to witness an historic occasion.

Captain and former Donegal native Lisa Duffy lifted the championship trophy and Louise Coyne deservedly collected her Player of the Match award. Team manager, Shane Reilly and assistant manager Shane Dunne joined an honoured and short list of bainisteoirs who have brought adult championship success to Clonard. The ‘Two Shanes’ join only two previous winning management teams on that list being Sean Campbell and Paddy Doyle in 1971 and Kevin Foley and Leonard Farrell in 2011, who both won Junior ‘B’ titles in equally emotional circumstances, not that this author can remember the first one.

After many photos, hugs, tears, and laughter in Kiltale, both team and supporters brought the cup home as the first stop was a post-match meal in the Monastery Inn. Celebrations were in full flow and it was then on to another great supporter of the club, Moran’s ‘The Hill’, where a marquee was erected in anticipation of the big crowd. A superb night (and morning) was had by all with thoughts of an under 15 match at 11am in Boardsmill just hours away, a game which also resulted in victory.

Sunday saw the cup brought on local travels to more of the corporate club supporters, as Brackens, Brian Coynes, and Paddy’s got sight of the championship trophy. In the days that followed and in traditional championship winning fashion the victorious team and management brought the cup to the local schools as celebrations continued. Adoring boys and girls in Clonard, Killyon, and Castlejordan National Schools got their hands on the silverware, something we’re sure many of them will get to do for their own teams in the years to come.