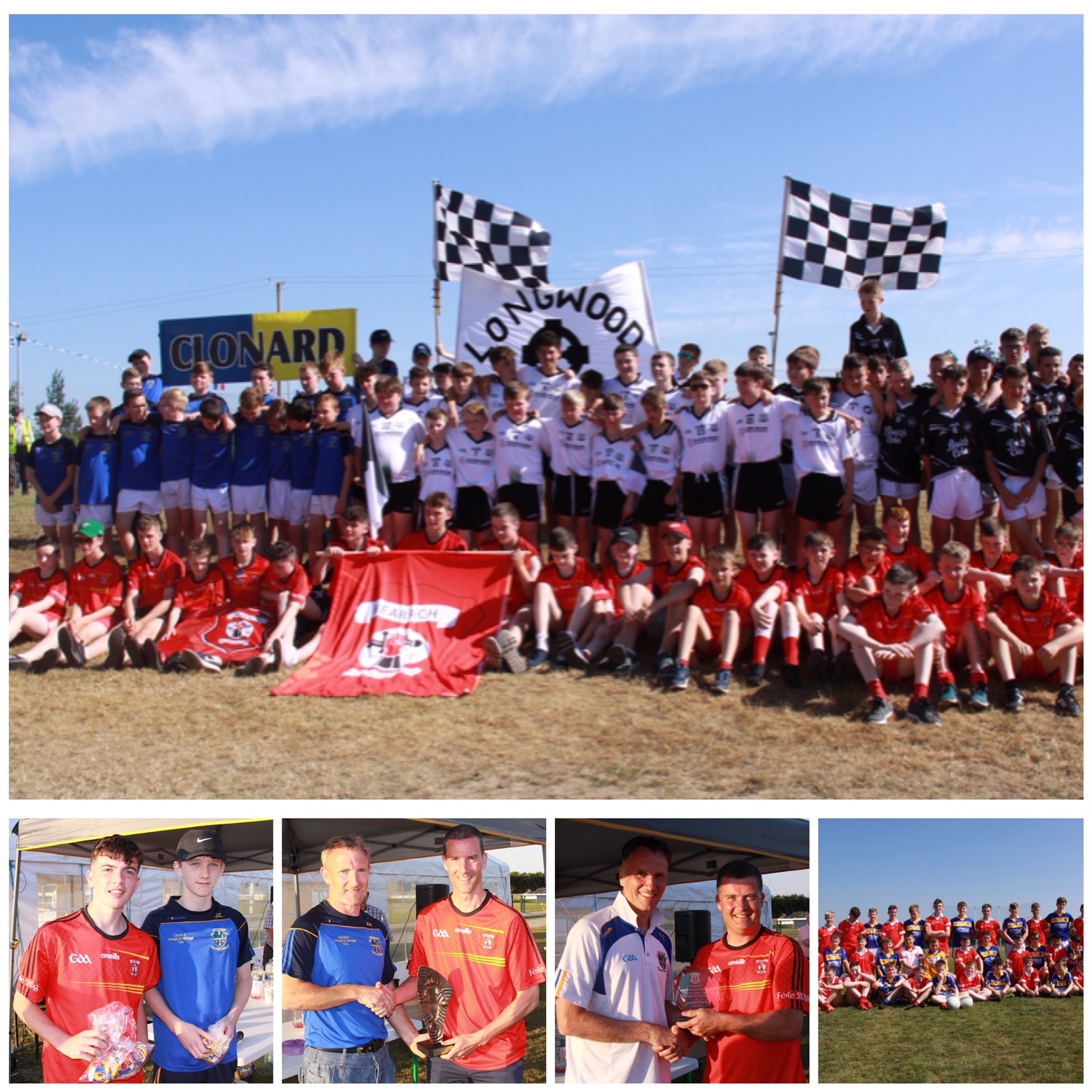 There are certain experiences in life that words or superlatives can never describe or justify. The GAA's international under 14’s Féile tournament has to be one of those experiences.

For those lucky enough to have participated or witnessed a Feile weekend then you will more than likely concur, for those who have not then you are missing out on an atmosphere and experience that is both unique and wonderful. If the opportunity arises, grab it with both hands, it is something every child, family, and community should experience.

For this year’s annual festival of football it was the turn of 144 clubs in the counties of Meath, Louth and Down to host the 2018 Féile Peile na nÓg tournament as they welcomed and partnered another 144 teams from all over the world. In total 288 teams would play 684 matches over three days. Luckily for us, the smallest club in Meath, was accepted as one of these host clubs, and in the draw back in March our visitors were determined, it was Beragh Red Knights GAA from County Tyrone who would call Clonard their home for the weekend of 29th June to the 1st July 2018.

One of the many wonderful aspects of Féile involves the visiting players staying in the homes of the host families. Children as young as 11 years of age, many leaving their parents for the very first time, are entrusted to the local club families and welcomed as if they were their own. It proves true what they say about the GAA, it's one big family, and lies at the heart of the community, particularly in rural areas.

Clonard and Beragh were joined by Longwood and Brittany in Group C of Division 11. Friday evening saw rounds one and two played in mediterranean conditions at an extremely well appointed Boardsmill’s grounds. Compliments to them on their facilities and organisation, weeks of volunteer work was evident all around.

Clonard’s first game was against French opposition, another unique aspect of this tournament, as the province of Brittany, an amalgamation of several clubs in the region, proved too strong for our young boys. Clonard appeared nervous throughout as the unfamiliar and big occasion seemed to affect them. The athletic French lads won by nine points despite a deserved late Clonard goal from centre forward Ciaran Murray.  Next up was neighbours Longwood and while Clonard put in an improved performance, it wasn’t enough, as Longwood ran out winners. There was disappointment among the Clonard players after the two defeats but spirits rose again as we escorted our Beragh visitors back for a meal in the Monastery Inn with music by the popular and local traditional musician Colm Keane. Host families were introduced and the players retired for the night, there was another big day ahead, while supporters stayed on a little longer.

Saturday morning of Féile brings all the host clubs up against their visiting club on the host’s home ground.  St. Finian’s Park was looking fantastic in the glorious sunshine, especially with the addition of a marquee and outdoor furniture for the day’s activities. On the pitch Beragh showed why they were crowned Tyrone Féile champions, and thereby representing their county, as their strong physical middle men dominated the game and they ran out easy winners over a younger and smaller Clonard side. Our boys showed glimpses of very positive team play as they continued to improve and will learn a lot from these outings.

After the game both teams jovially joined together for group photos with the bonds between players growing as the weekend progressed. Tea, sandwiches, and buns were then enjoyed by the parents, players, and supporters as they mingled for a second time, adult friendships were also clearly starting to form. The beautiful weather added further to this idyllic occasion.

The players retired to their host families for an hour and it was then back to Boardsmill for the quarter finals. Beragh topped the group unbeaten with maximum points and advanced to the cup competition while Clonard took their place in the shield. There were mixed emotions for both sides after the quarter finals when a delighted Beragh squad defeated Galway side Cortoon Shamrocks in a tight and pulsating game, while Clonard narrowly lost out to familiar foes and Meath division 6 champions Moynalvey, who defeated our boys in that league semi-final last month.  Lady luck deserted Clonard as they were denied two certain goals by both the post and crossbar, while Moynalvey saw a speculative high looping effort find the corner of the net. Clonard’s involvement on the pitch was over, but their weekend certainly wasn’t.

Next on the Saturday itinerary was a parade in Longwood as all four group C teams paraded from the National School to the GAA grounds. You could gauge the huge sense of pride and delight on all the boys faces as they turned the corner on the main street and were greeted by all the cheering and clapping families and supporters. They were led along the route by a talented bagpiper, who certainly added to the carnival atmosphere. There was no let-up in the activities as once the parade was complete it was immediately back to Clonard for 5 pm to watch the Tyrone versus Cavan qualifier game, as the Beragh boys shouted on their county team to victory.

Everyone then made the short trip to St. Finian’s Park in the glorious sunshine as a family BBQ took place with a great show of support from all sections of the club. The local parents produced a wonderful spread of food for the second time, with Clonard’s “Féile Head of Catering” Orla Doyle, organising all catering logistics with the excellent help of every single players’ parents. A huge thank you to all of them, it truly was a team effort. The boys and girls of Clonard and Beragh were now mixing together as if they had known each other for a lifetime, never mind just two days. It was identical with parents of both communities as the friendship bond was well and truly complete.

There was then time for some speeches, thank you’s, and a presentation of impressive plaques. Beragh coach and committee member Sean Owens presented Clonard Juvenile Chairman and Féile Co-ordinator David Campbell with their gift while Clonard coach Niall Walsh presented Beragh coach Barry Conroy with their equally impressive gift. A joint club set of wristbands was also presented to the two team captains, James Connolly of Clonard and Patrick McCann of Beragh, to be distributed among their fellow players. A lovely souvenir to remind them of their Féile weekend.  As the sun started to set over the Park, children were once again escorted to their host families and parents and supporters made their way to the local Paddy’s Bar for some music and entertainment. Another great night was had, well in to Sunday morning.

For Beragh the weekend wasn’t over yet as they had the small matter of an All-Ireland semi-final in Darver, near Dundalk, where they would take-on on Chicago. Everyone met in the Park at 10am and waved an emotional goodbye to their team bus and supporters’ cars. It said a lot for the friendships formed that many of the Clonard children and parents also made the long trip to Darver to cheer on their new friends. And it may have helped Beragh, as they advanced to the final with a win, where they would take on Eadestown GAA from Kildare. Another tight affair was only decided after extra-time when the Kildare side prevailed by two points. Disappointment for the Beragh boys but when the dust settles it will be a weekend to remember, they can be extremely proud of their achievements and are a credit to their club, to their families, and to their coaches. For Clonard they can be equally proud, and should focus on the positives, they are improving all the time. Three of the teams whom they lost to went on to reach their respective All-Ireland final, one of them winning it, Brittany. They too are a credit to their club, their families, and their community.

The club extends a huge thank you to every volunteer and every community group in Clonard and Killyon who helped create and play a part in such a memorable weekend, there are too many to mention but you know who you are. We would also like to thank the financial sponsors of the Clonard Féile team, Moyvalley Meats, Forde’s Eurospar Kinnegad, McTiernans Careplus Pharmacy, Clonard Vintage & Heritage Club, and Campbell Consultancy & Accountancy Services.  This weekend will live long in the memory and rightly so, it is one of the biggest and most wonderful sporting and community occasions in the country, if not the world…..but words cannot describe it.